Camille, Philippe and their Venoms 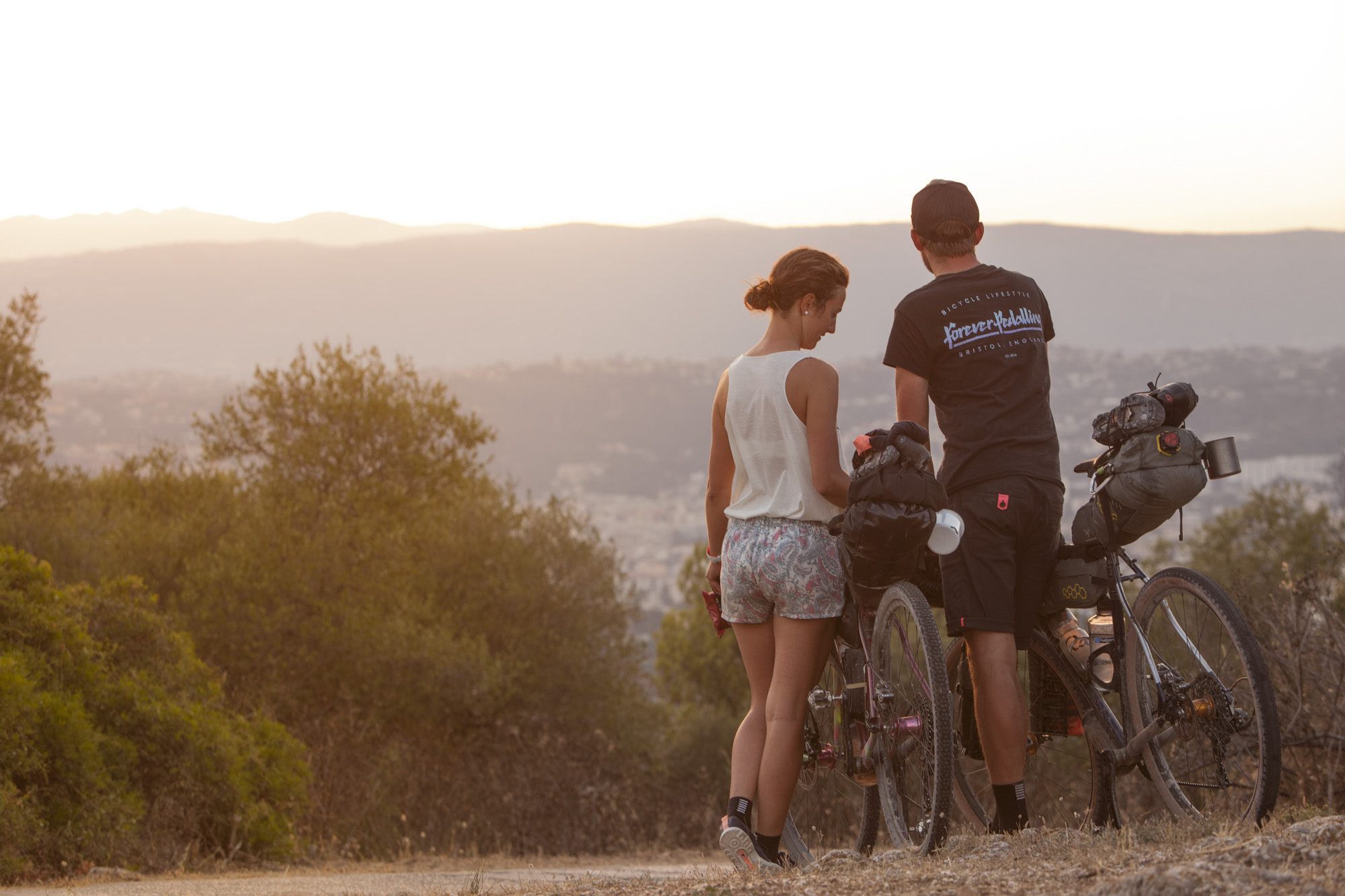 The couple from Liège just finished crossing the french-italian Alps on their homemade gravel bikes. I meet them, chilling on a terrasse at the end of a hot summer day, serenely smiling with the accomplished journey. 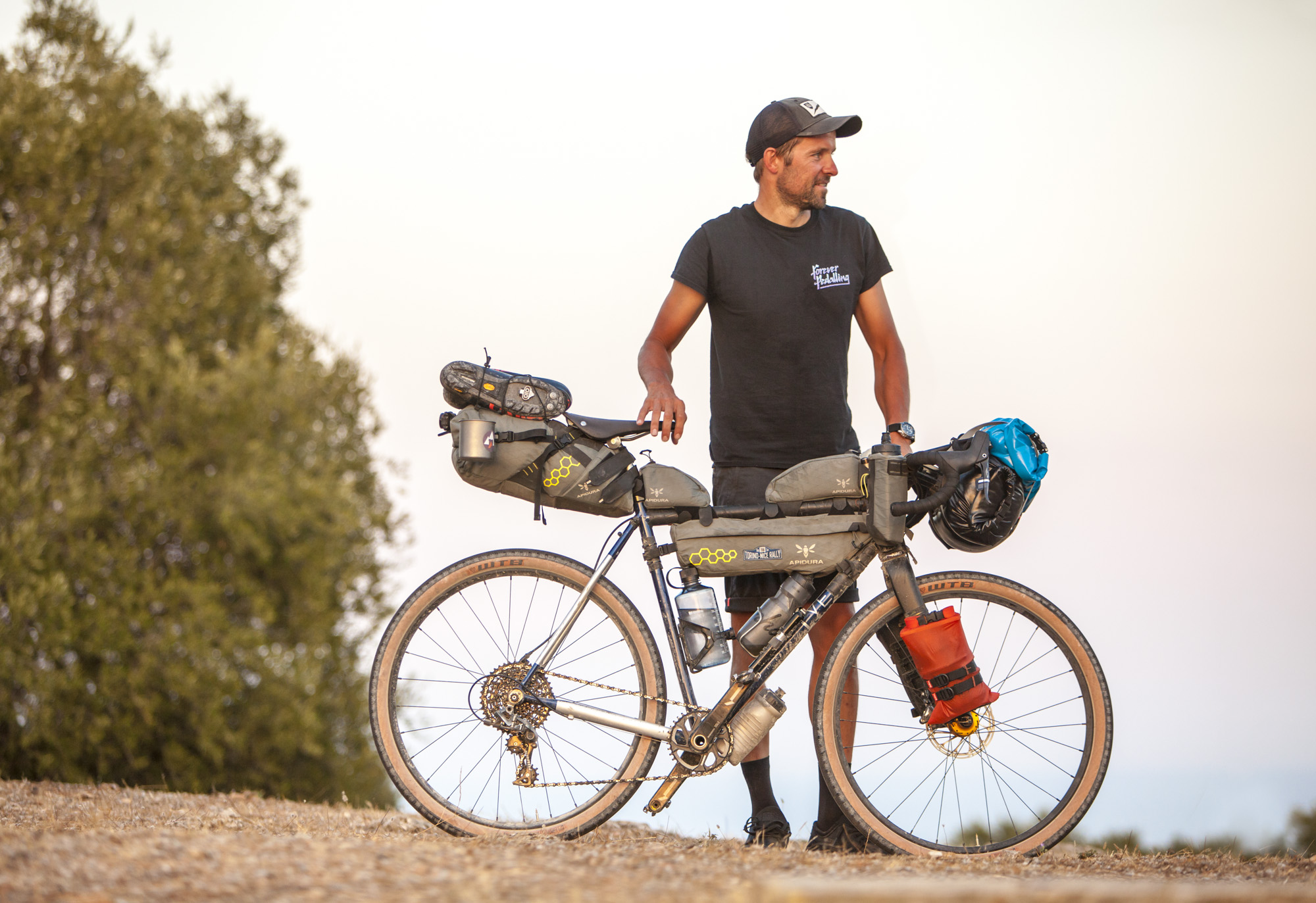 Nice bikes ! Philippe, did you make them ?

Yes ! I was looking for a gravel bike, I already had a road bike and an MTB… I wanted a bike that could ride anywhere. I had specifications in mind but couldn’t find a match.

Then came the idea of attending a training course ; it doesn’t cost much more than the price of a frame.

Late 2015, I went to Copenhagen, to the french OTM Bikes. He trained in the US, at the UBI in Ashland, OR, he worked in Italy at Zullo’s… So I made my frame there.
Camille was envying my bike, so I went back to Tom’s. Then I bought a jig, some second-hand gear, I made a third bike at Tom’s, and I’ve been doing that for a year and a half now. I’m keeping on learning. 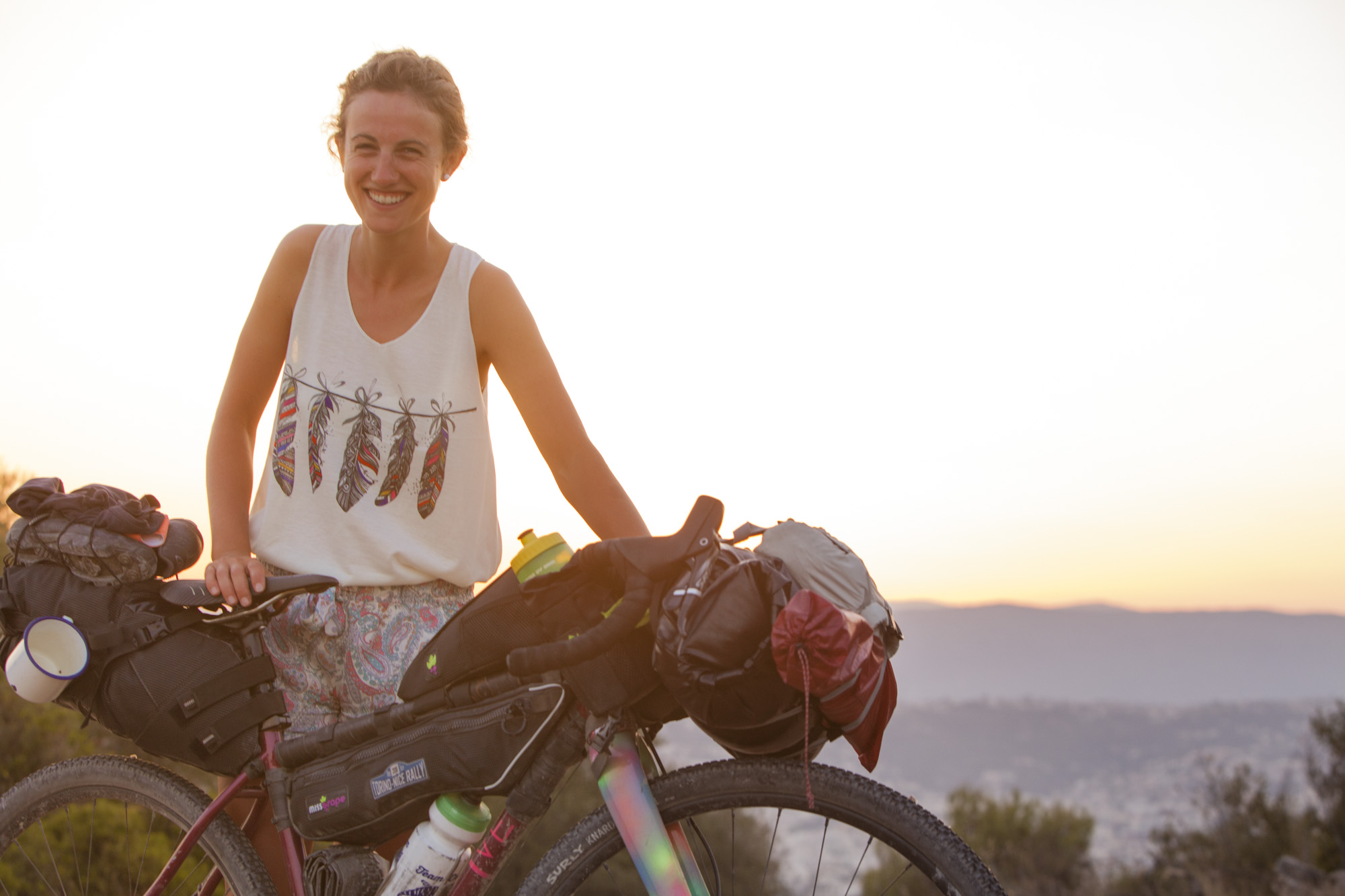 -Camille : I’m a dentist. I move a little by bike, I commute during summer. We enjoy bikes in all forms, we often travel by bike. Vosges, Dolomites, the Ventoux…

-Philippe : I partly work in a neighbourhood shop. Next to that, I built myself a nice, small workshop in my parents’ garage in order to make frames.
I am training to be a bike mechanic, as it is a regulated profession in Belgium. I took evening classes and passed my first year. I am hoping to make a living with bikes. 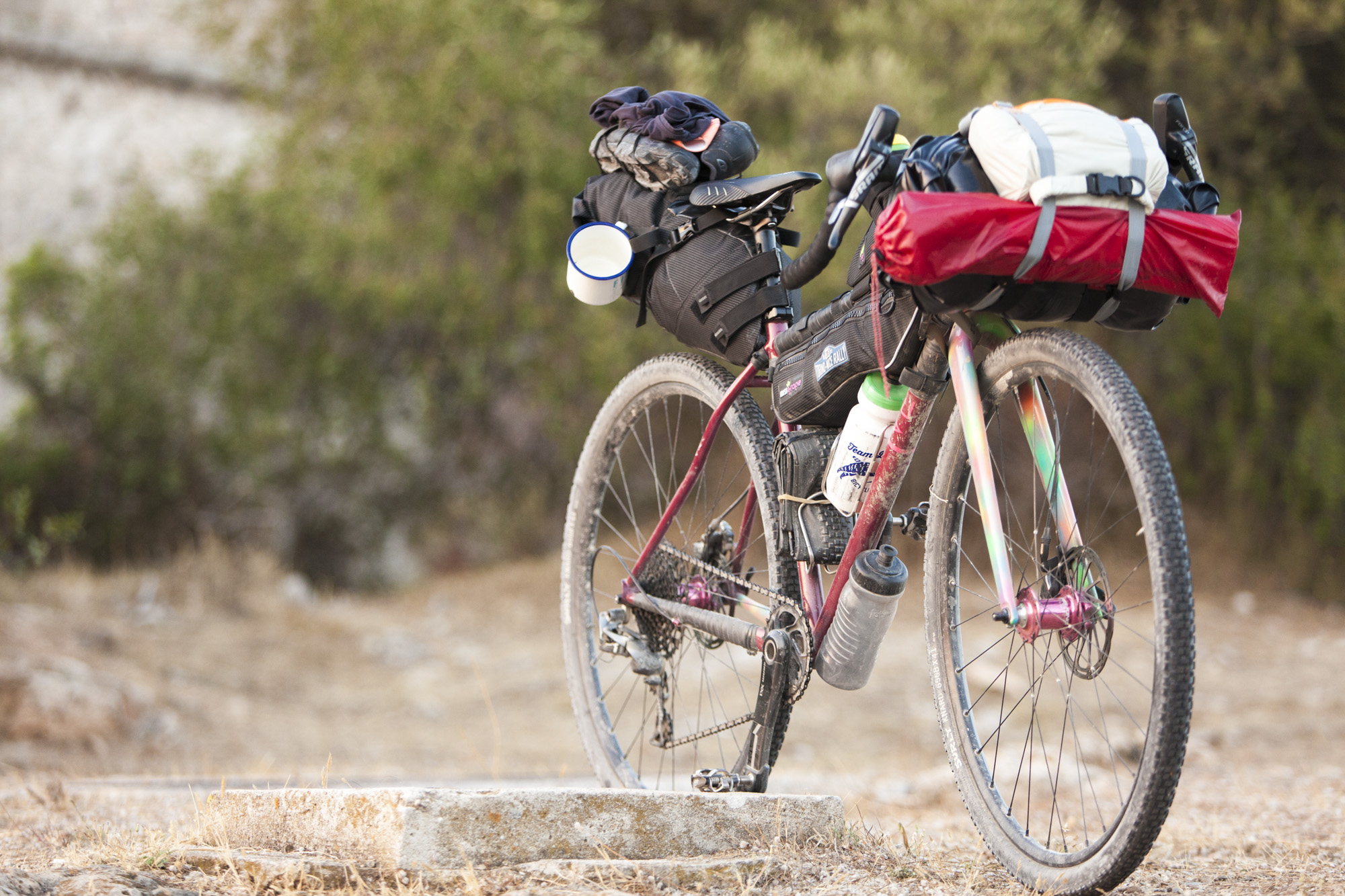 Are you going to make your own bike brand ?

I cannot afford it for now. And these are my first frames, I won’t claim being a framemaker yet. I made a bike for me, another for Camille, some more for friends… I have a small order book with ten bikes or so. It takes time, it would remain an anecdotal occupation.
When I access the profession, I would like to fit out a space as I like, unlike most other shops where 25 bikes are displayed next to the other… I’d like to offer brands I like, Co-Motion, WTB, Chris King, Blackburn, all these folks who make this bike-culture I enjoy.

It is important to me to get the most complete academic education possible. I still have a lot to learn, and I have the will.

For the moment, I cannot access the profession, so I don’t plan for the future too much. First things first : framebuilding. Still one year of training. 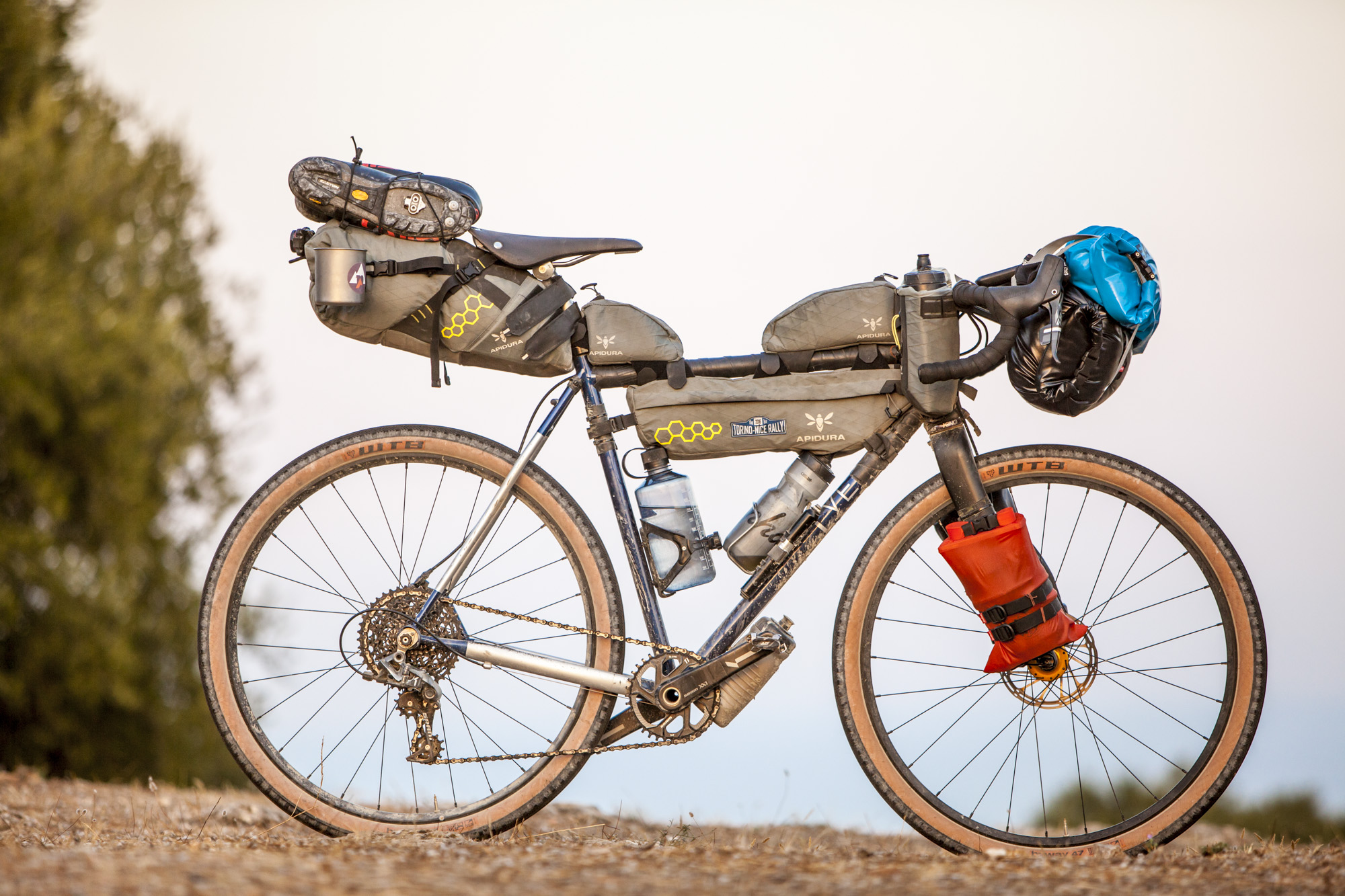 Where does the name Venom come from ?

Honestly, there is no signification. I had to give a name to my first frame, and that one came up, it sounds good. (laughs) So many brands are called after the framebuilder’s name, I didn’t feel like writing « Joie » (« Joy ») on my bike.
-Camille : That could be good !
-Philippe : Brands I like, stuff like Moots, they come from anecdotes. At some point, you have to choose a name, it doesn’t take much. 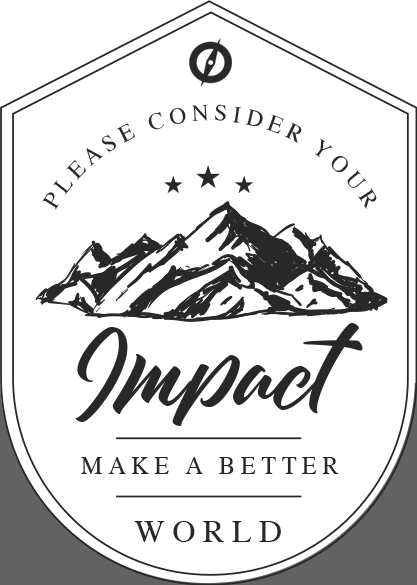 A bad stumble or just wear and tear, the life expectancy of bikepacking bags is being challenged.
Still, let’s not throw them away as soon as they are damaged !

-Fix a hole :
Gorilla tape. A piece inside, a piece outside to be sure, and off we go !
Tip not to have to carry the whole roll : wrap some around a pen.

-Fix a strap:
Some zipties or paracord are always useful !

For Cordura as well as X-Pac, a solution is to glue a patch inside and another outside.
The back of Cordura is coated with smooth polyurethane, thus will stick better.
Unfortunately, polyurethane glues aren’t exactly eco-friendly…

Sew a patch over the hole, rub the seams with wax and heat it with a hairdryer. It is sturdy and weatherproof. You will just need to re-wax it once in a while. 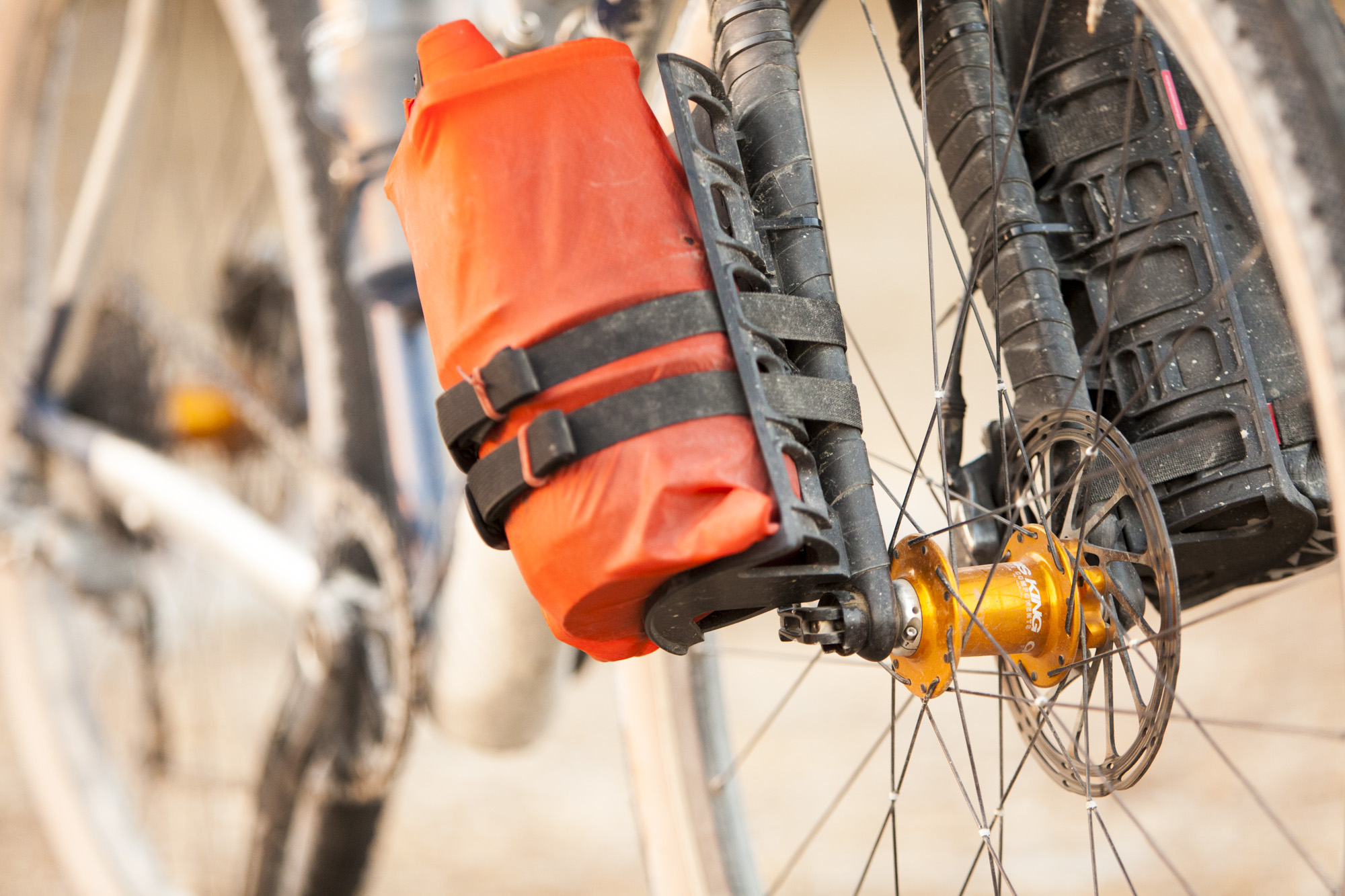 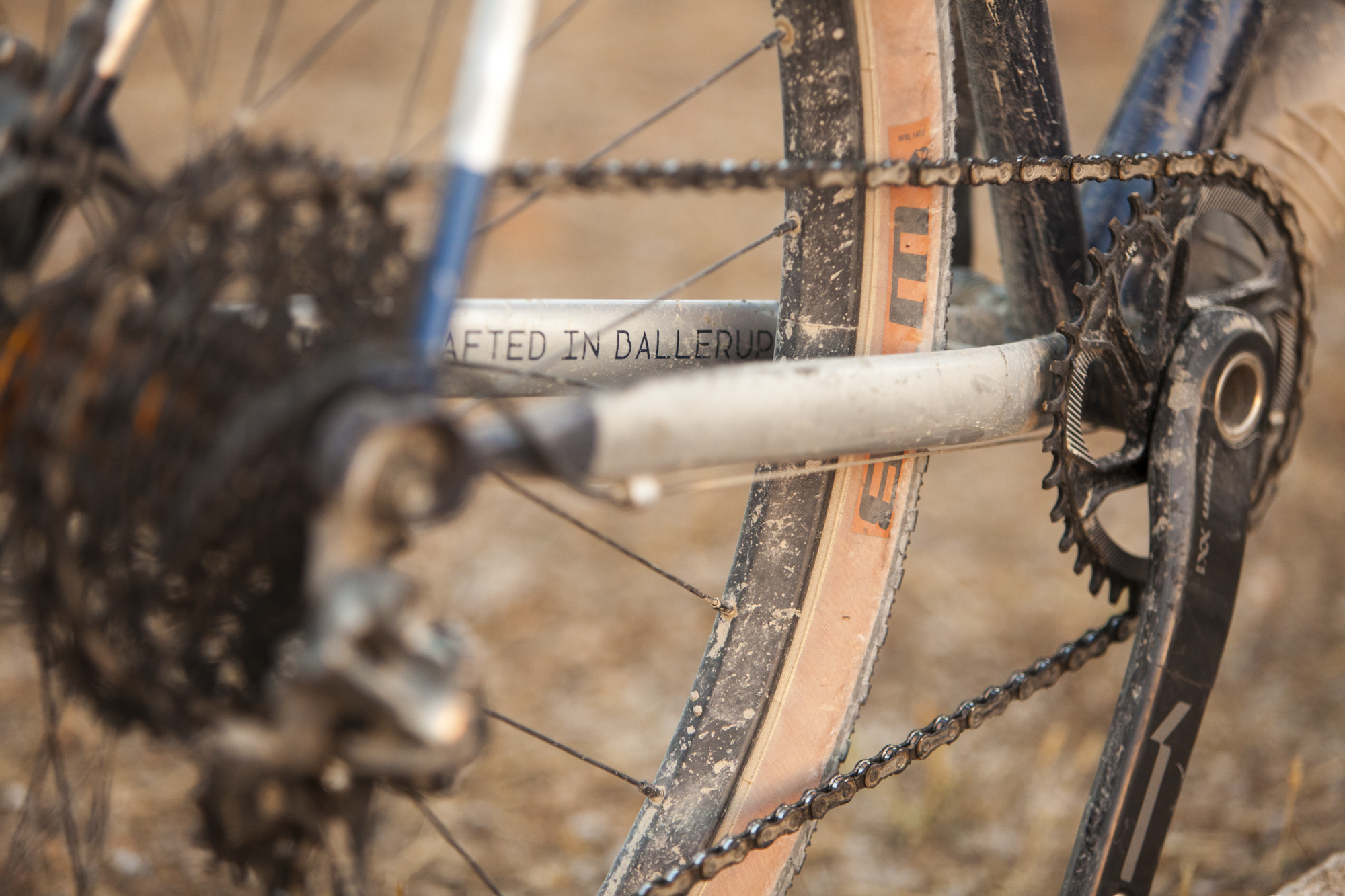 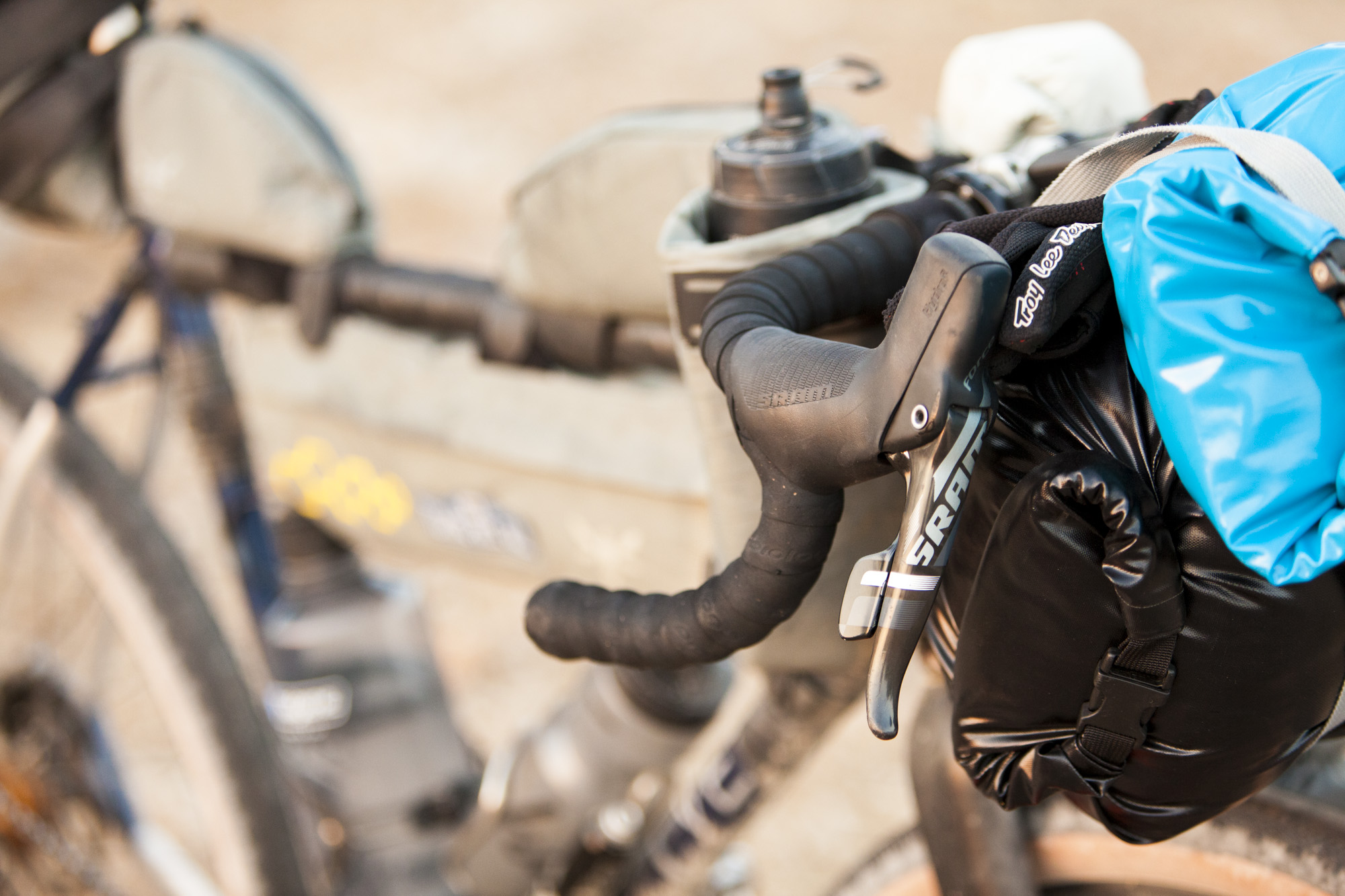 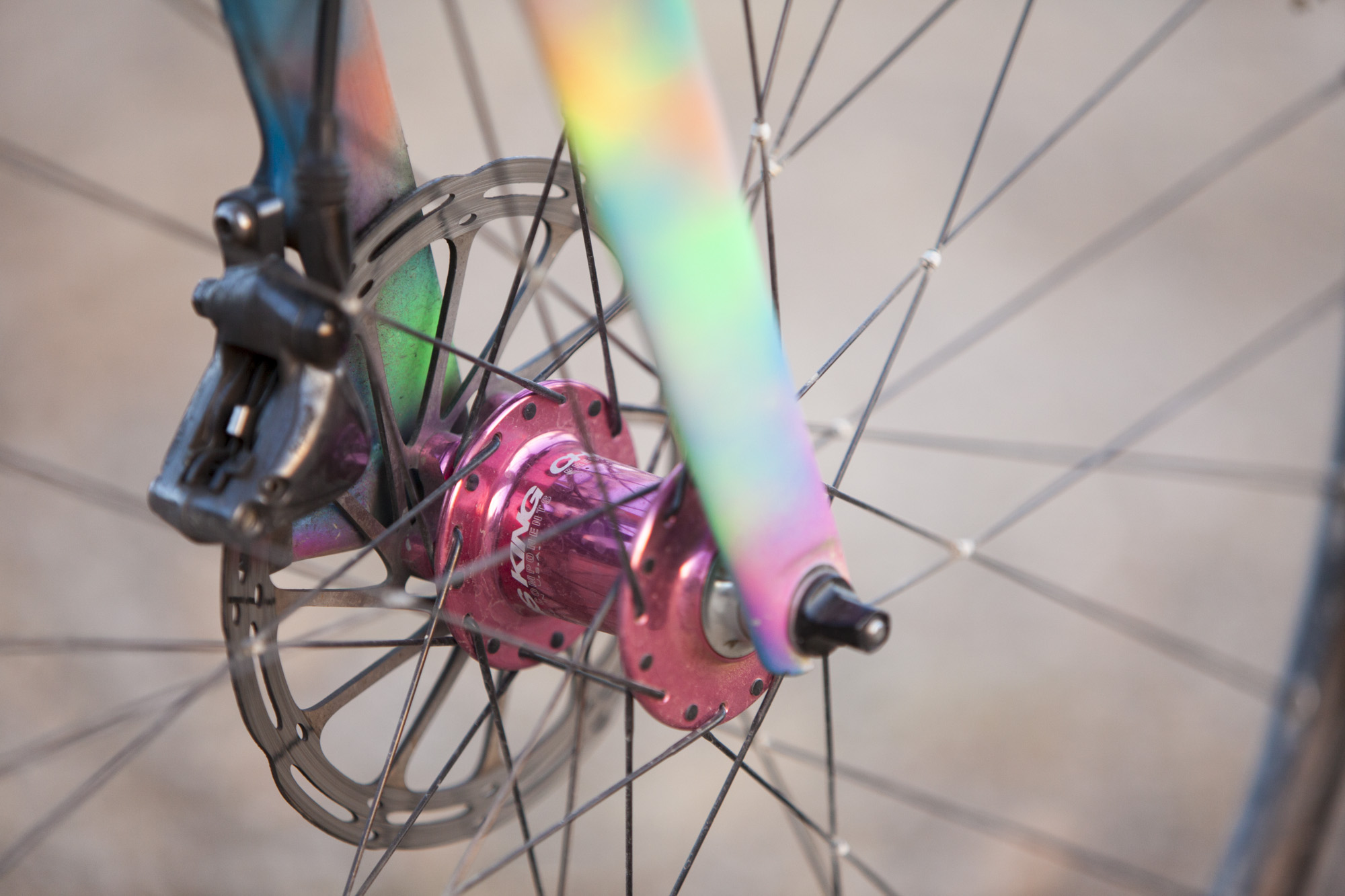 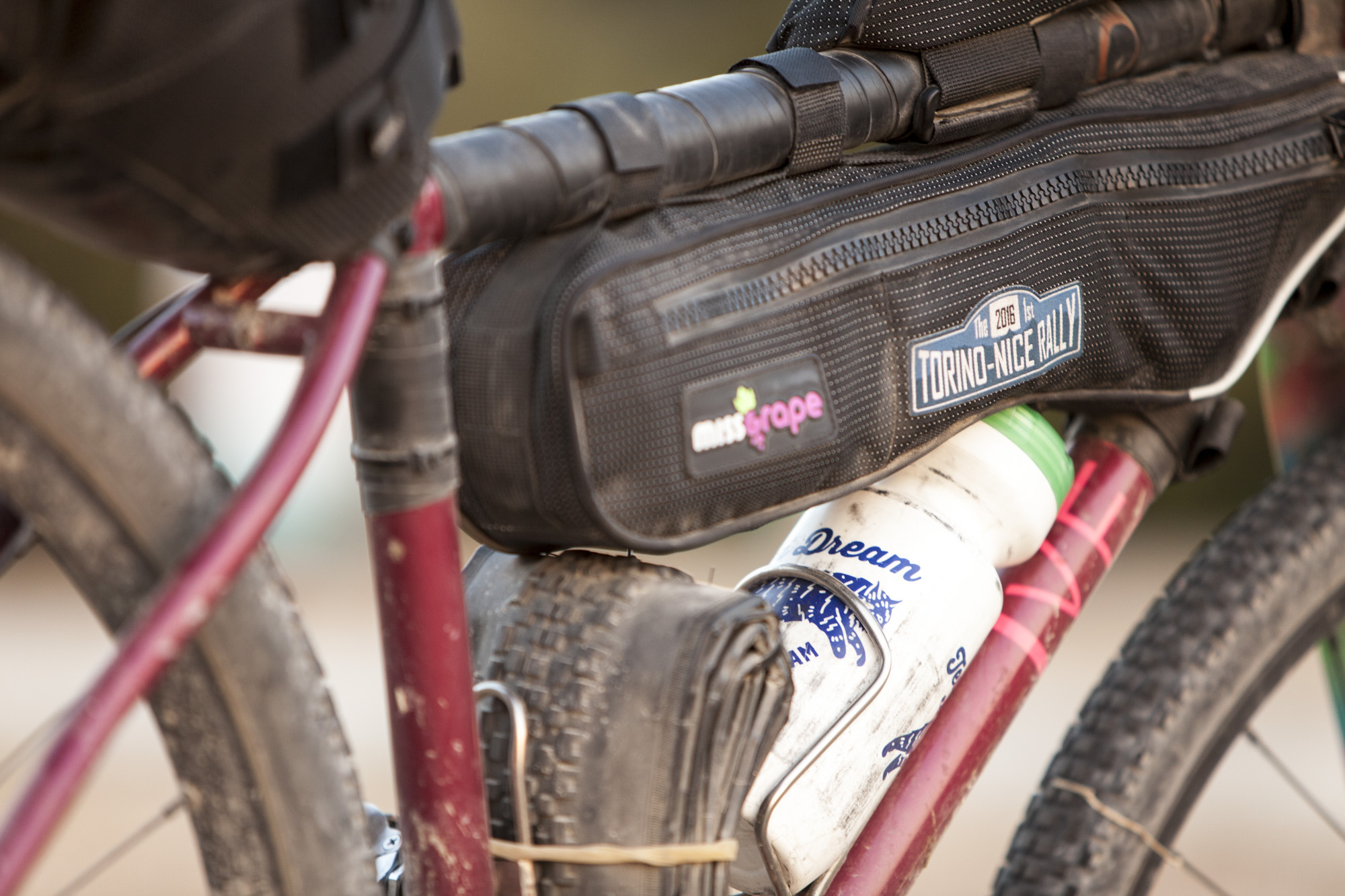 What about geometry, can you tell us more ?

I really wanted tyre clearance. Seat and chainstays are Columbus S-Bend, 44 fork, tapered headtube… I made a mistake on mine, bottom bracket is too low compared to the crank arms length. Well, it was my first !

About geometry : I wanted mine pretty classic, not too sloping.
Camille’s and her sister’s have much more slopping due to their smaller size. These bikes are 650 but I put on 700 forks to gain some height and reduce the headtube size. Especially on small bikes with thin tubes, I find long headtubes unsightly. It allows the front end to be a little higher without having to stack spacers. Anyway, that’s what I did on mine, and I like it. Bottom bracket is BSA, for reliability and low maintenance.

So, my bike doesn’t have carbon bikes’ efficiency, which were made to ride on smoother surfaces, but it wasn’t meant for it.
It really is about fun and comfort.

Do you have other biketrip plans ?

We’d love to go riding in the Black Forest, it looks fantastic ! 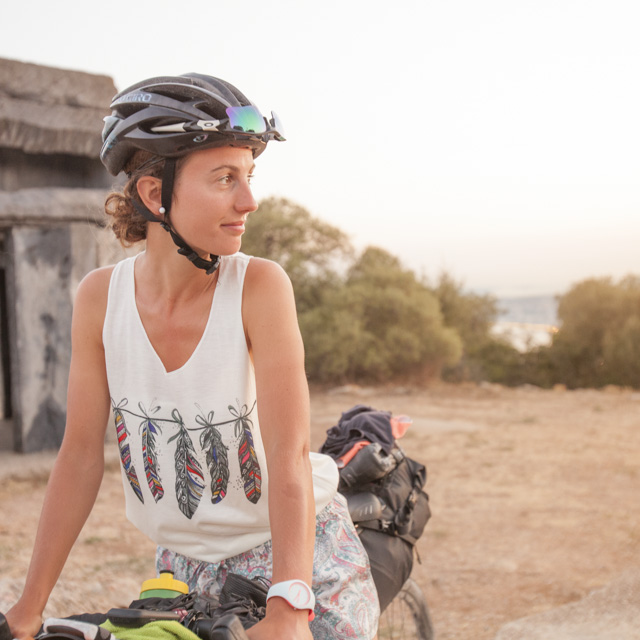 Amateur of fine parts and joyful jerseys, this young sunny-days-commuting-dentist switches from riding her Venom, 650C Legend by Bertoletti and her Pinarello FP UNO… that is fixed to her home-trainer !

Her crush : every single jersey by Machines for Freedom ! 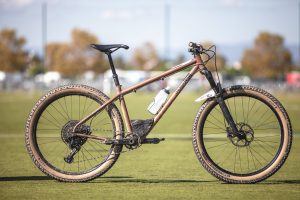 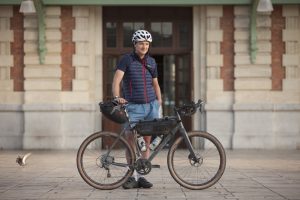 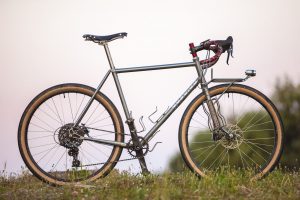 Cyril lives by bike. As a dad on his cargobike or seeking adventure on the trails, he enjoys leaving his French Riviera, taking time for shooting photographs or for a fine single-malt under the stars.