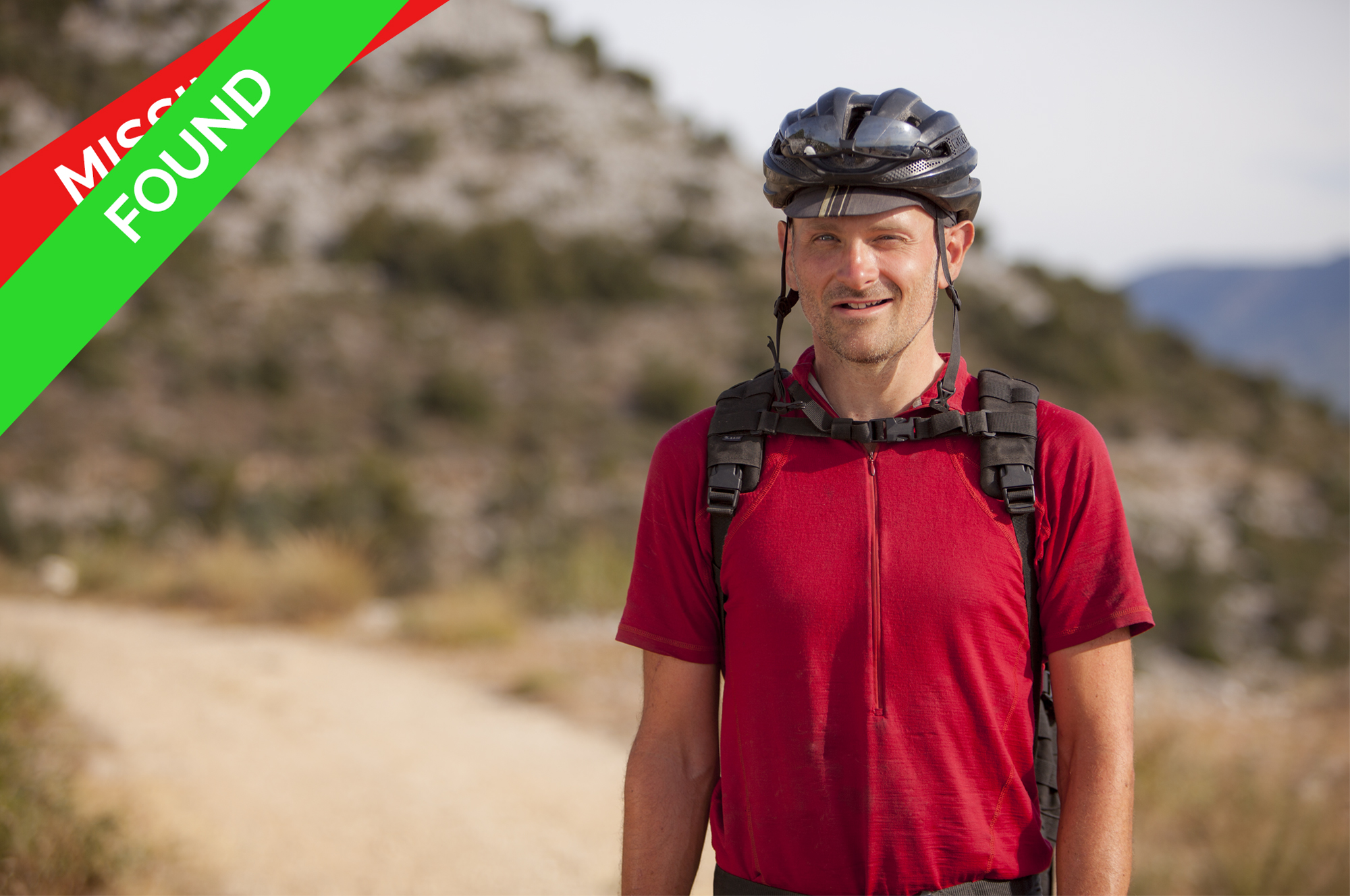 Andy Cox is missing since December 1st. He was bikepacking the Baja Divide trail.
I will collect all information here and keep this page updated.

If you live along the Baja Divide or know someone there, please spread the word keep an eye for him or his bike.

Any help is appreciated. Do not hesitate to hit me up on Facebook @Evanoui.cc or via the contact form here. 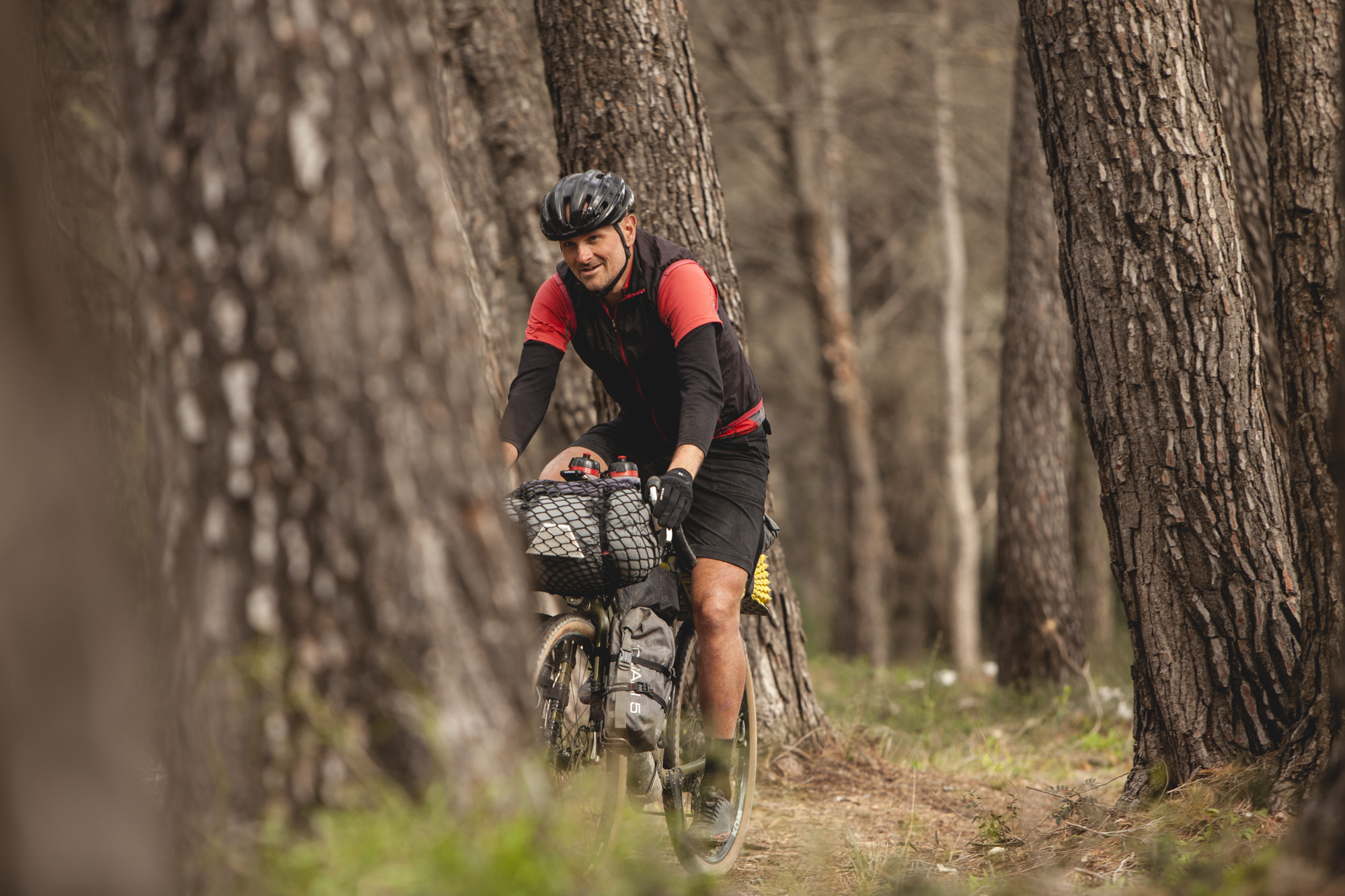 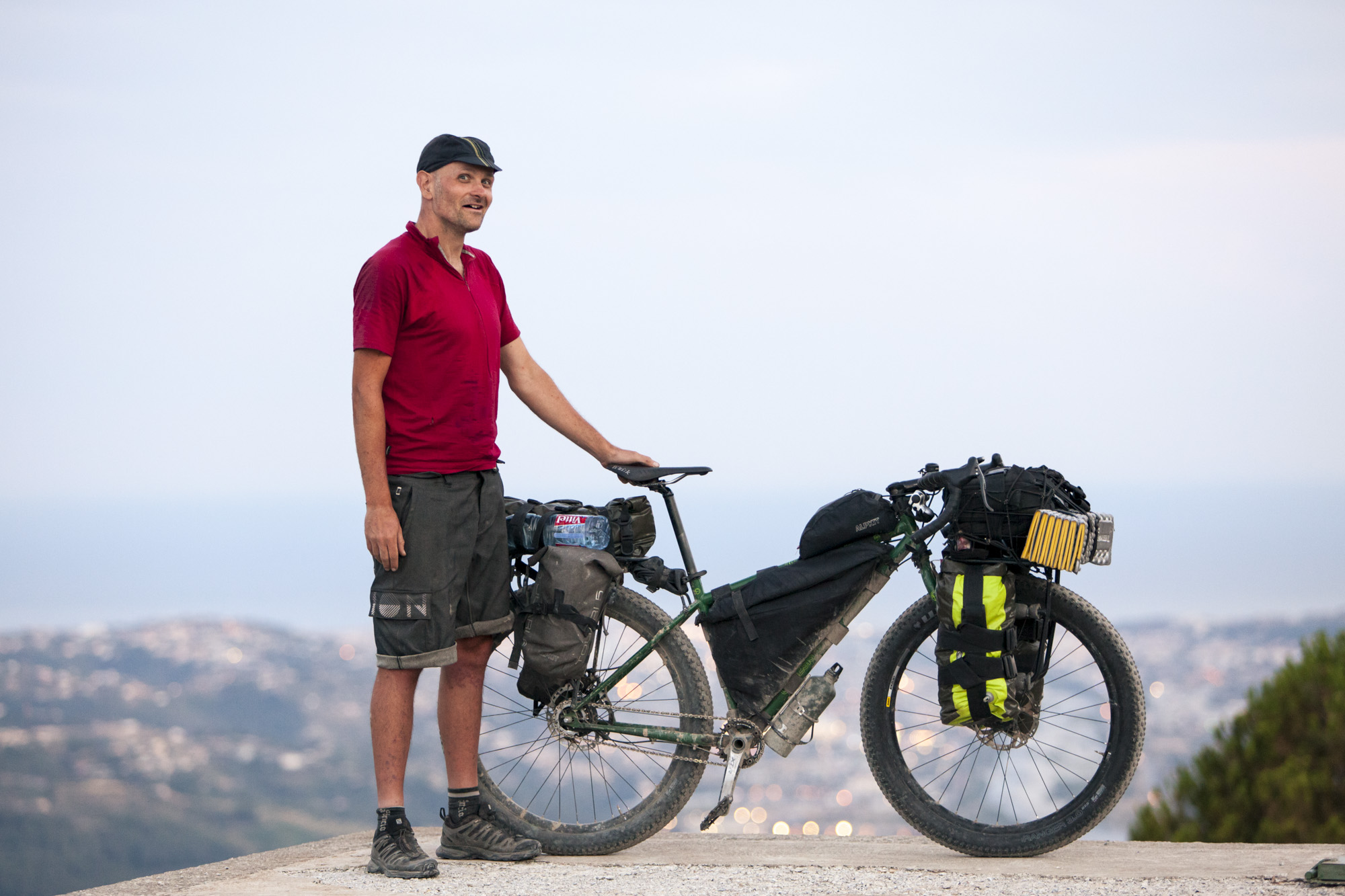 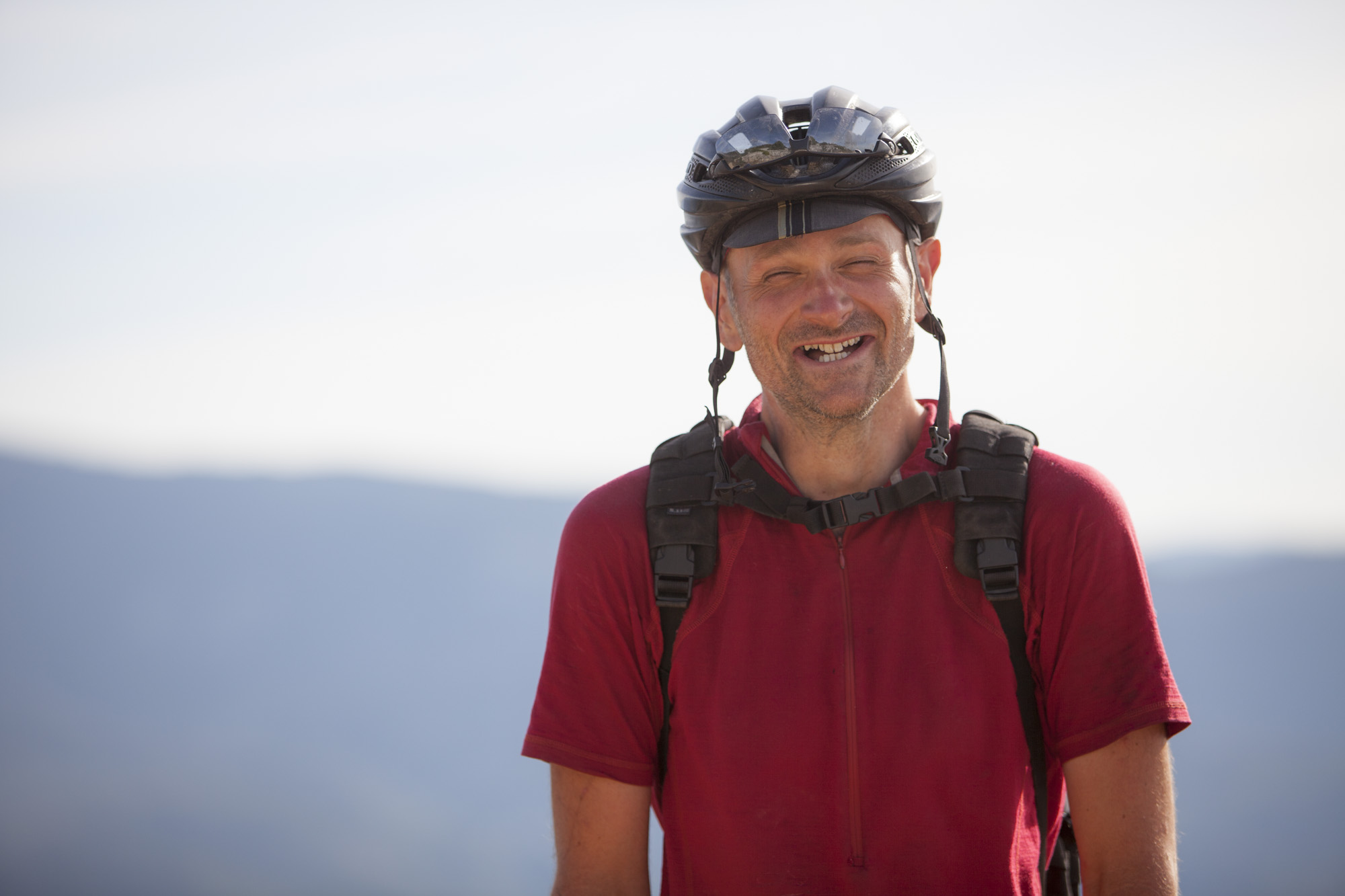 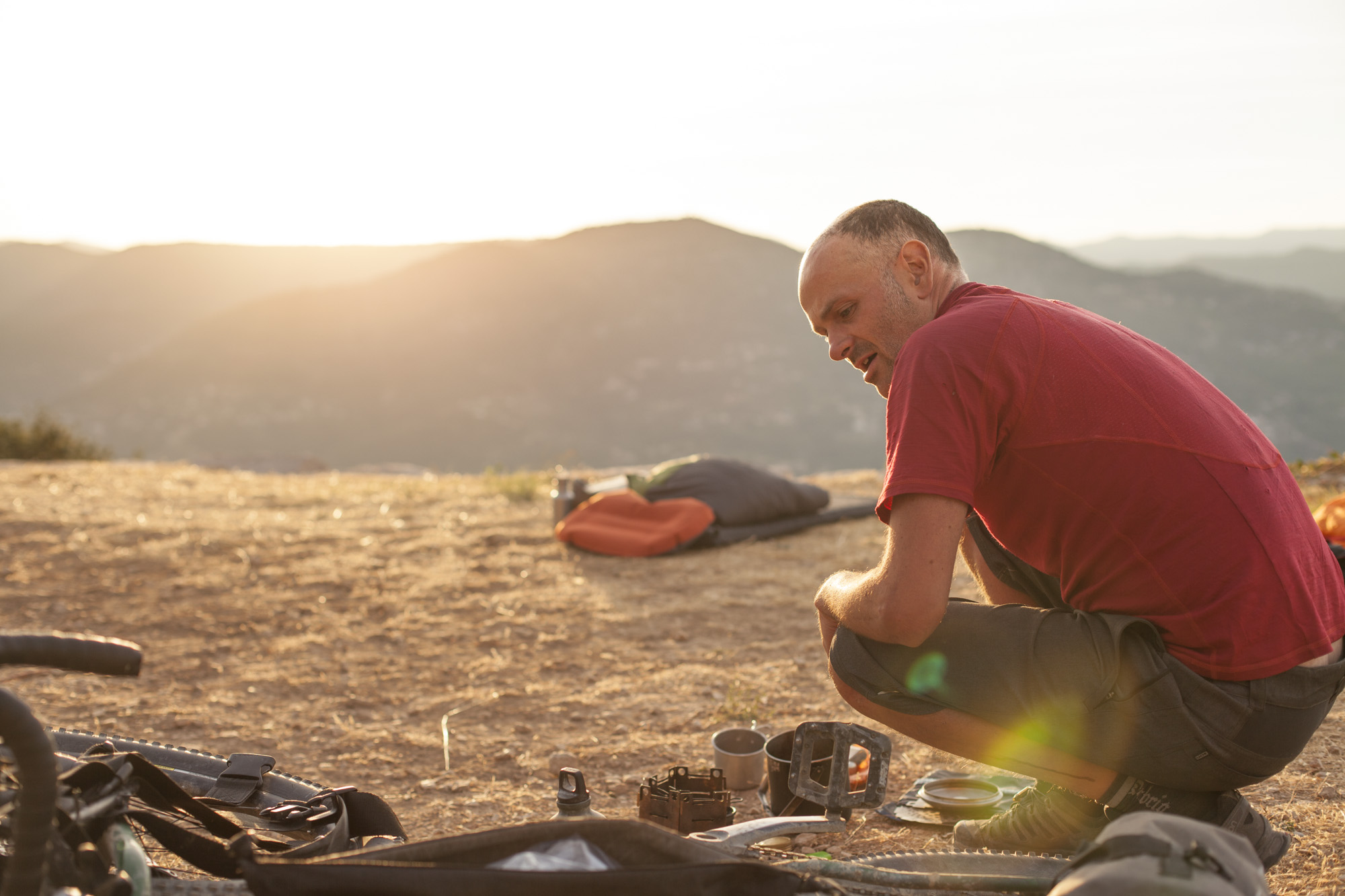 It is quite a recognizable bike, with its drop bars and big tyres. Plus I don’t think this british Genesis brand is very common in the area.

Transmission differs from picture, he dropped the internal gearing for external on the day before he left. 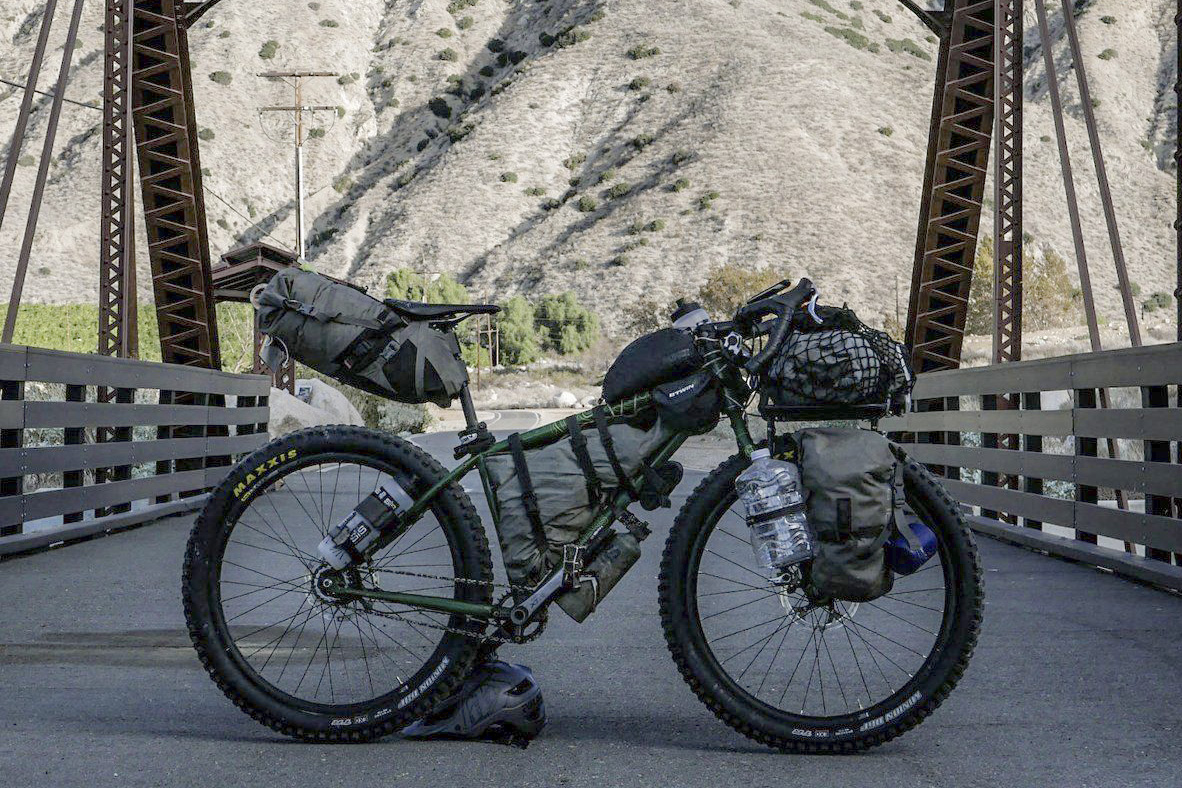 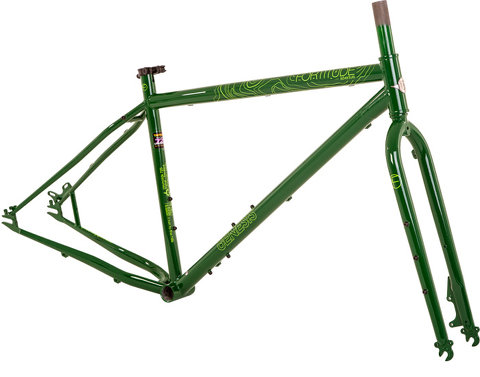 In his post, he thanks Ann and her son @multisportscott, which is a great lead.

Unfortunately, he must have mistyped, as this multisportScott lives in New Zealand.
So please, do not contact him.

I've had a great few days off traveling, mostly doing f'all, except rebuilding my bike with external gears, and it's been great to talk with a native of Coronado and stay in her beautiful house, which I later found out is in one of the most expensive areas of SoCal. To which I was surprised that they didn't call the 5-0 and get me deported! ? So a big thanks to Ann, and her son @multisportscott for the hook up….. Onwards and southwards now into Mexico and endless dirt roads by the sea on my adventure of #nottheukforwinter. ??? #bikepacking #bajadivide #agrandadventure #sunshineforever

According to his Polarsteps, his latest known position was in Dulzura, by the tyre shop last saturday. 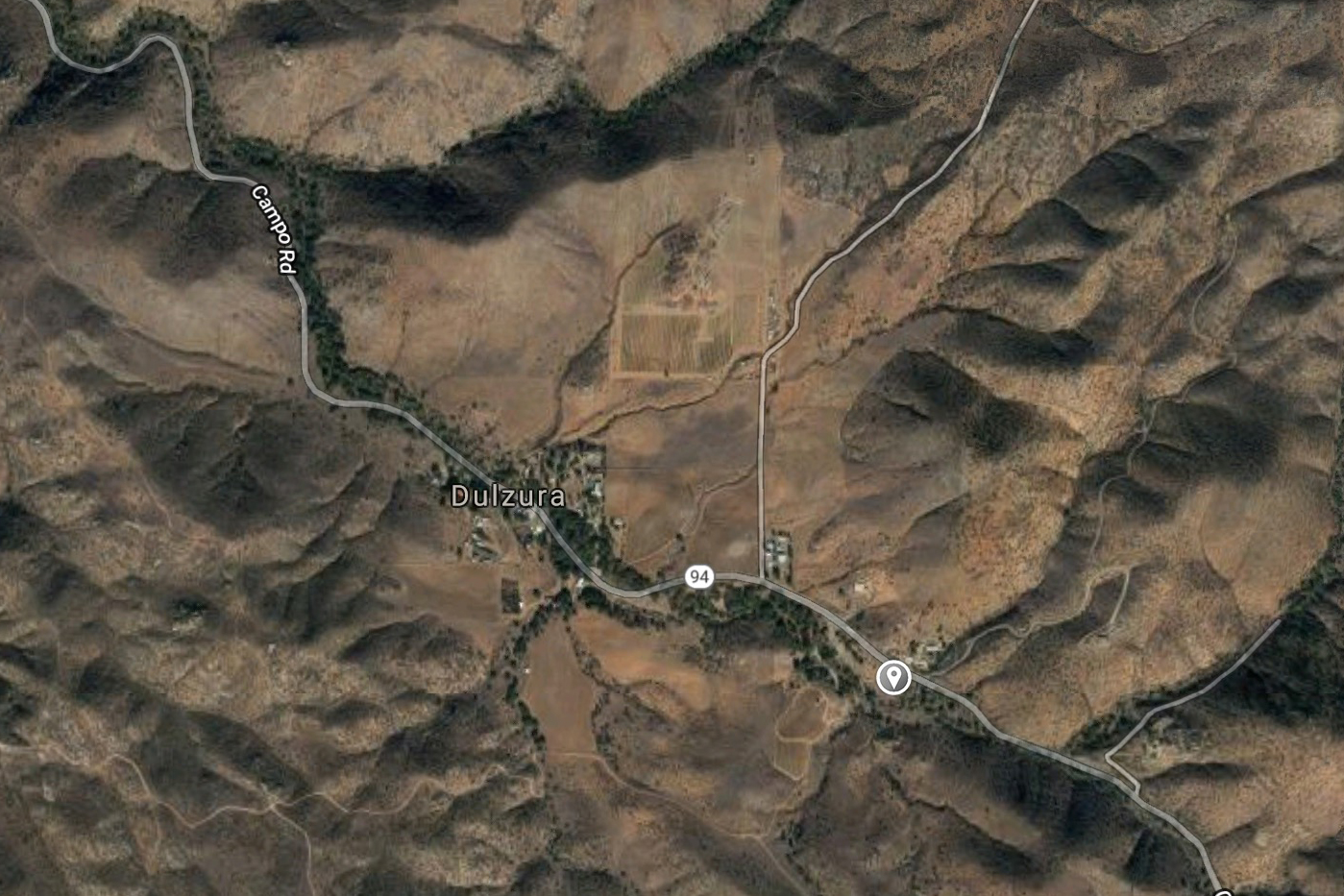 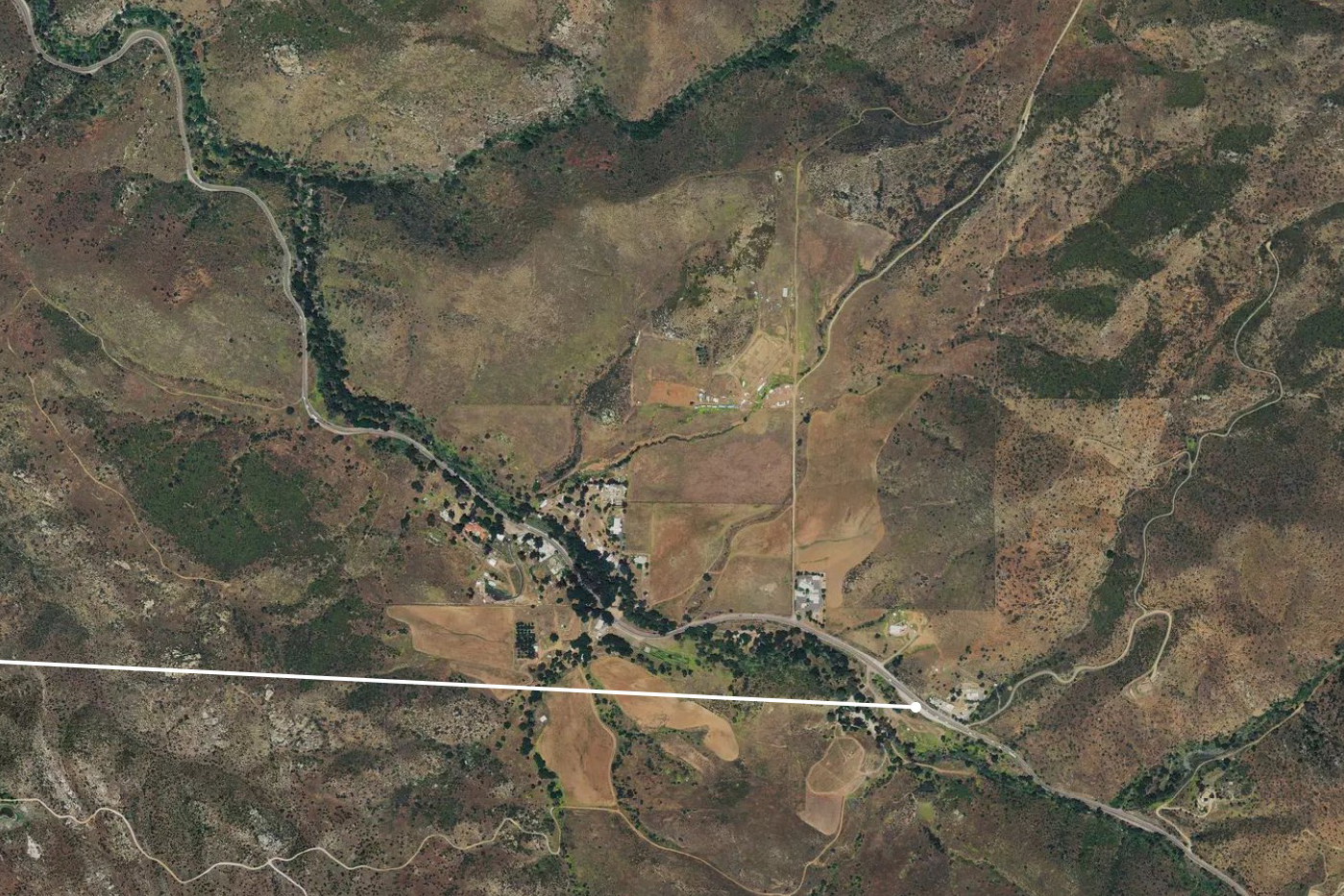 This position is at a mere 12.6 miles / 20km from the border in Tecate, so even riding offroad, he must have been there in the morning.

His parents in the UK went to the police, who said they would pass it to the US ambassy who will contact the border police in SoCal, as they keep a log of all entries.

A helpful guy called Enrique went to the border to ask, but he’s been answered the lady in charge is not available until monday…

[Update dec. 8, 23:49] Apparently, the border has an automatic license plate scanner for cars, but cyclists are not systematically controlled. 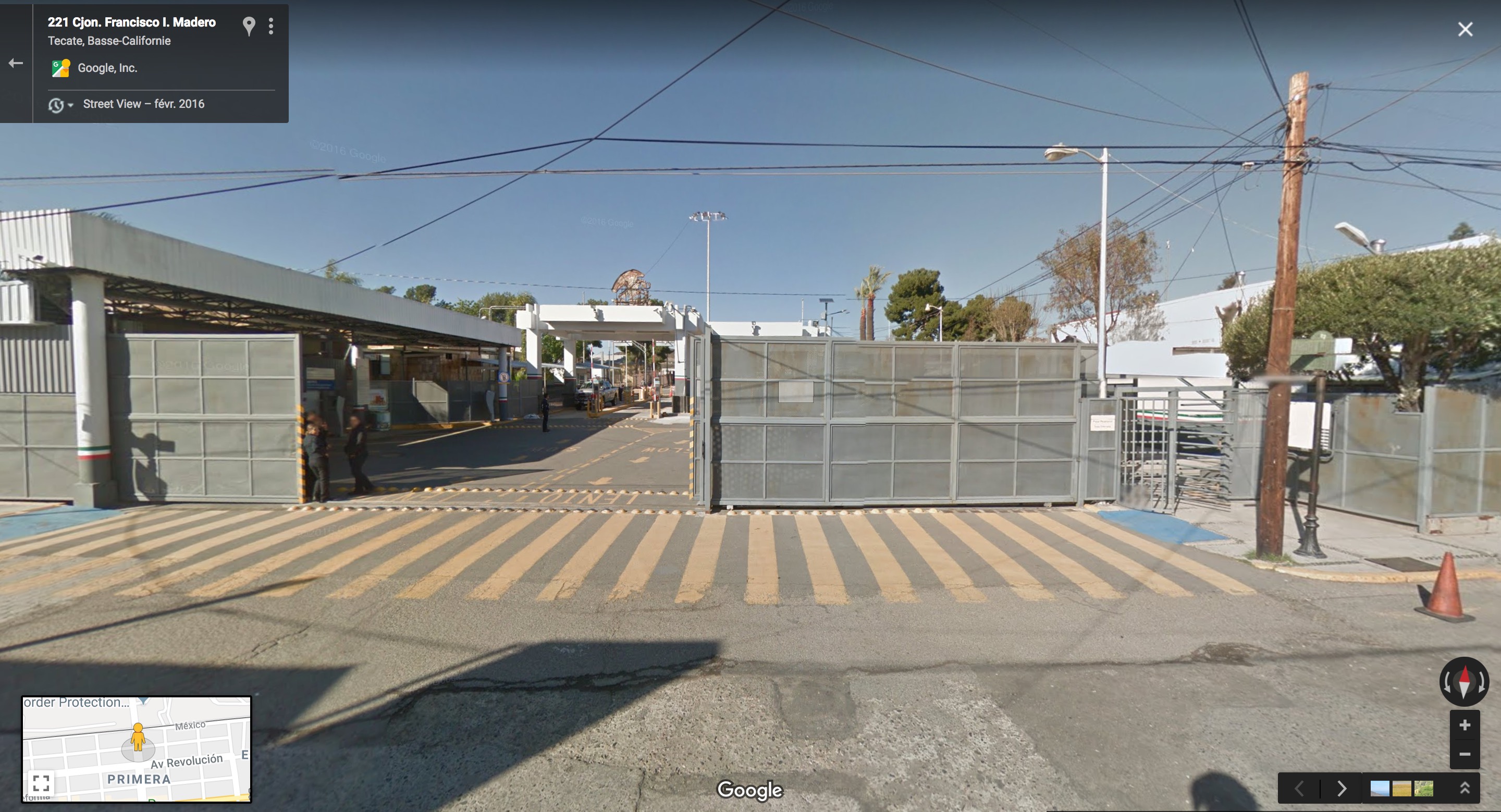 So where is he?

Andy is known for his intuitive navigation. His motto is “Making it up as I go along”.

Still, he wrote on Polarsteps :
“The route that I’m following through Baja California is going to be quite unusual for me in that I have a GPS track, section notes and a resupply guide for the whole 2500km of it!”

That’s good news, we know where to search. For once he’s not following his nose and making knots with his GPS track! 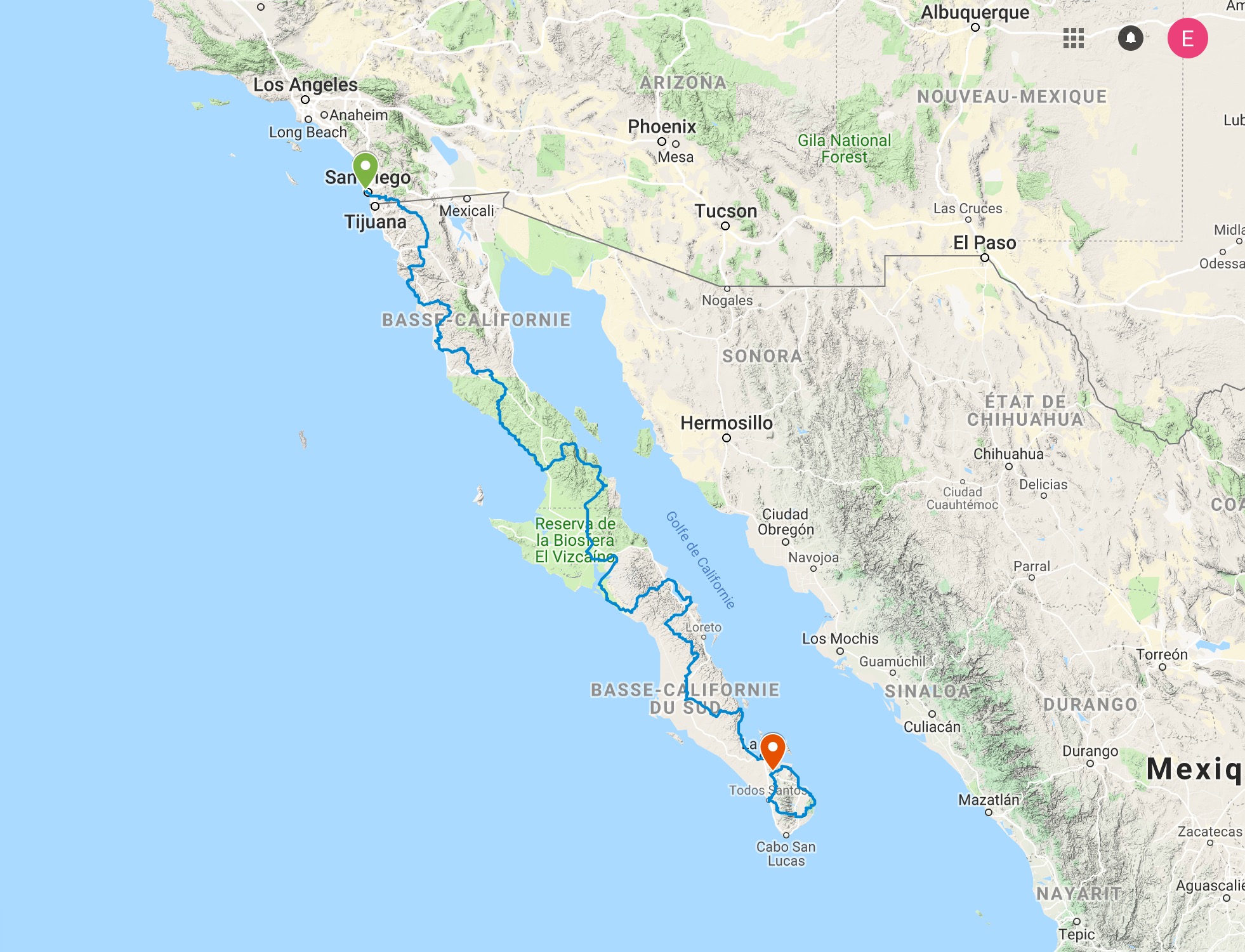 He is a slow but consistent rider, takes time to take pictures and enjoy the ride with his loaded bike. 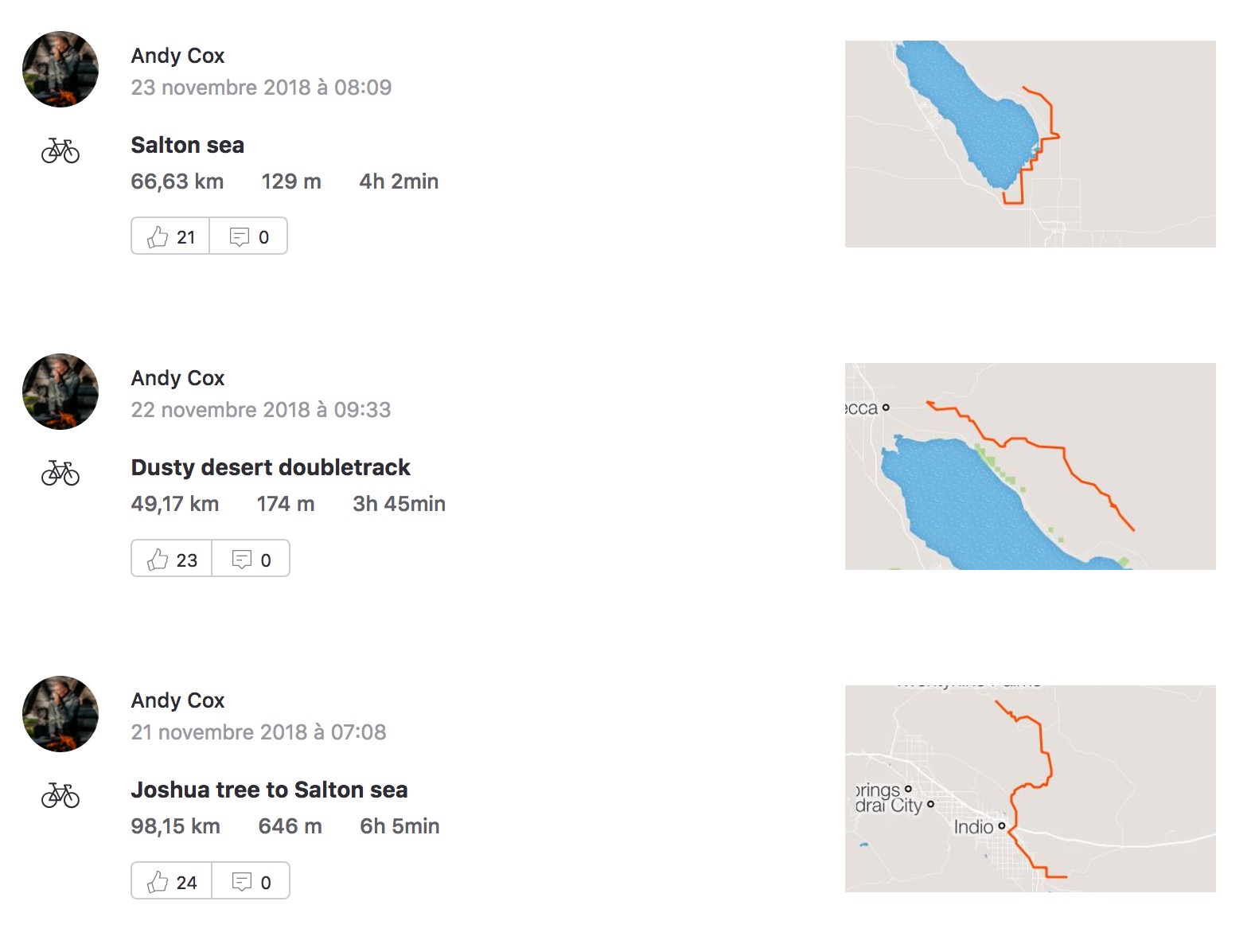 With the kind help of the Baja Divide Facebook group, I got in touch with Salvador, who runs a FassBike in Vincente Guerrero, at the south end of the Northern Sierra section. This guy knows everyone on the trail!

As he says, under normal circumstances, it takes a week to ride from Tecate to Vicente Guerrero. 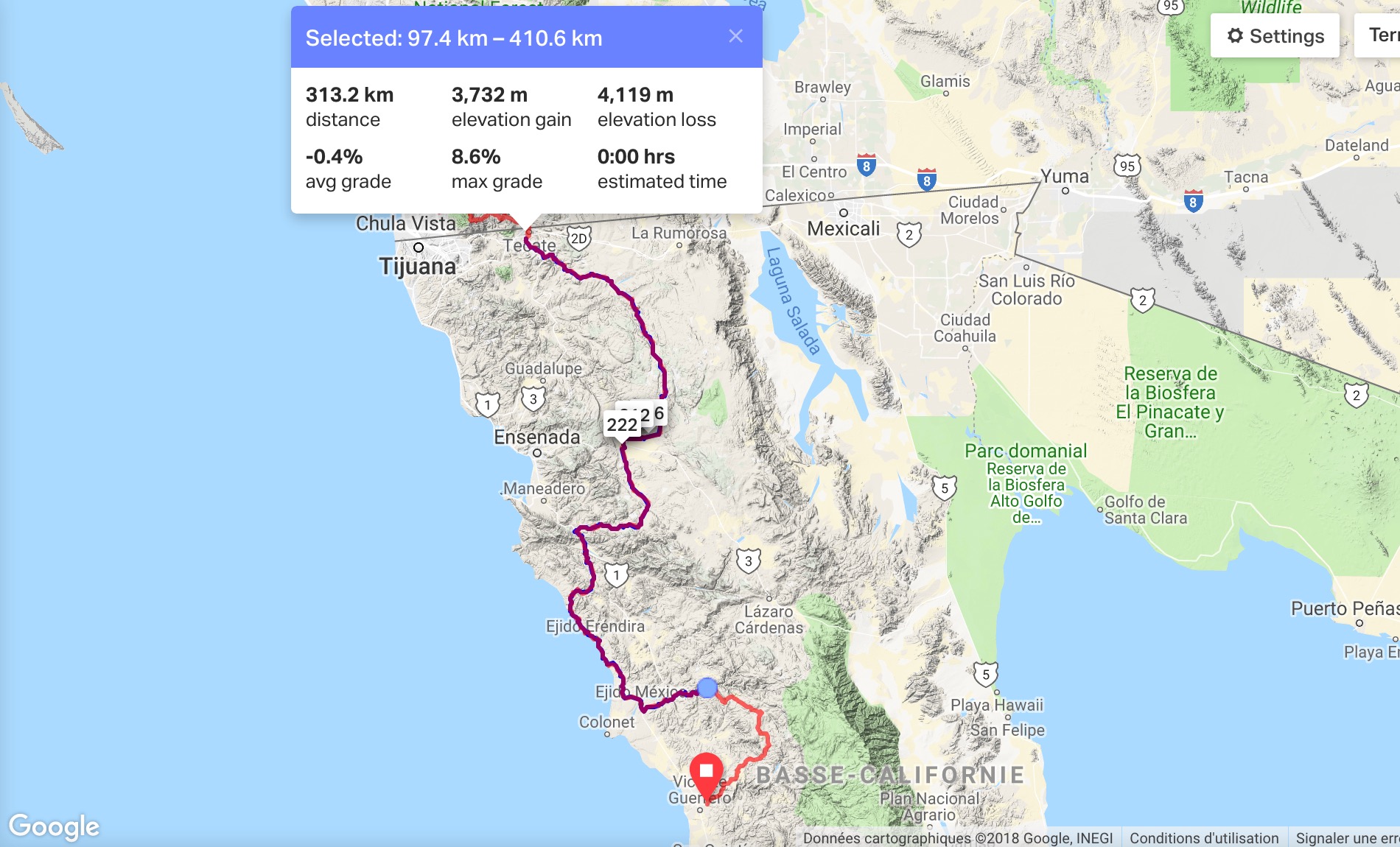 According to Salvador, it has rained for 2 full days on wednesday and thursday, making riding impossible.

He also says one cannot ride for one or 2 more days because of the mud.
(Weather on picture is apparently wrong. I knew forecast could be wrong, but “pastcast”…) 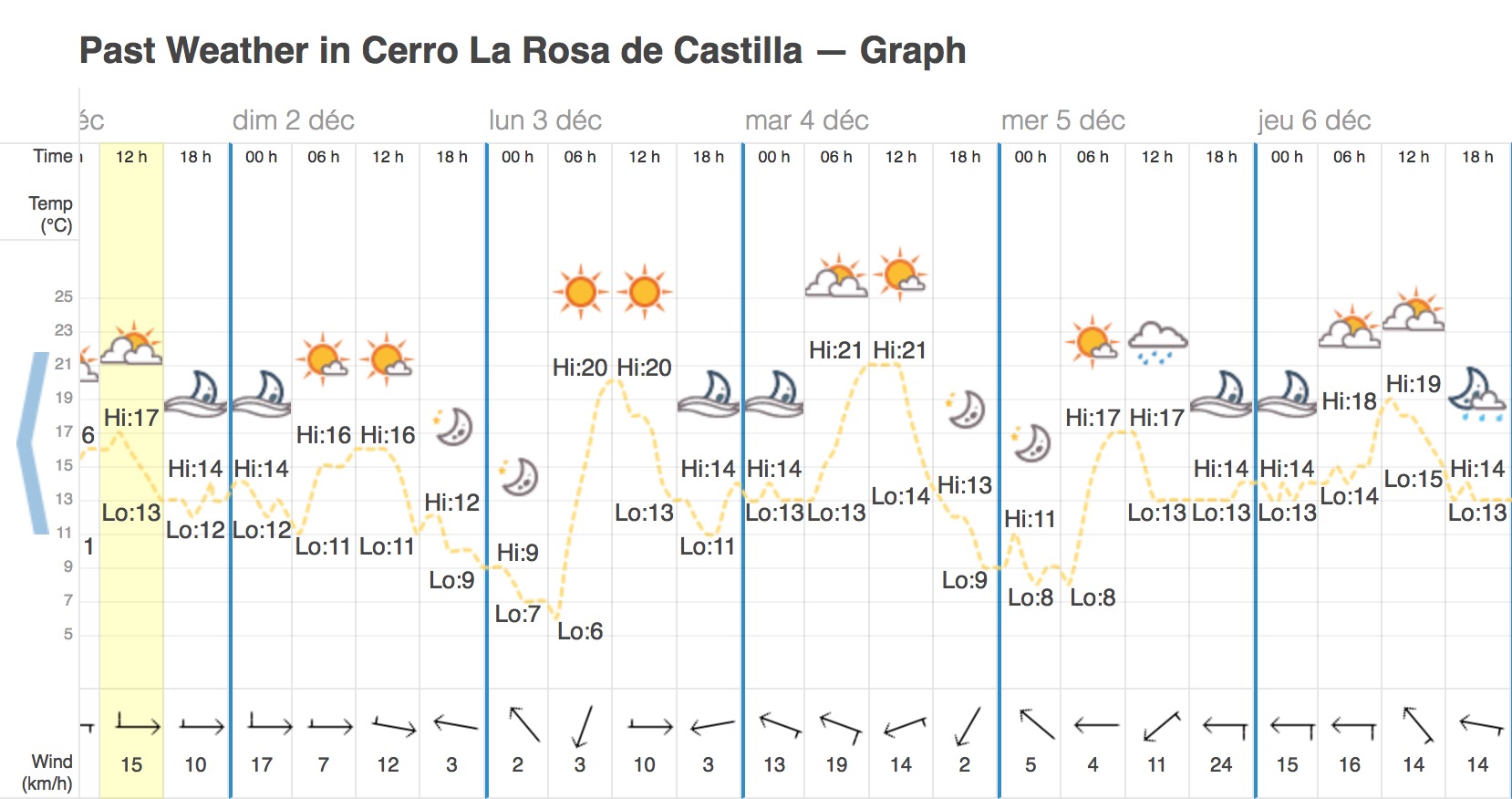 Where could he be?

So it means Andy could ride 4 days before stopping because of the rain on wednesday.
He might have resumed riding today, but won’t cover much distance because of the mud.

*That would be real slow. Mate, if it turns out you rode that slow, I’ll make fun of you for a while! 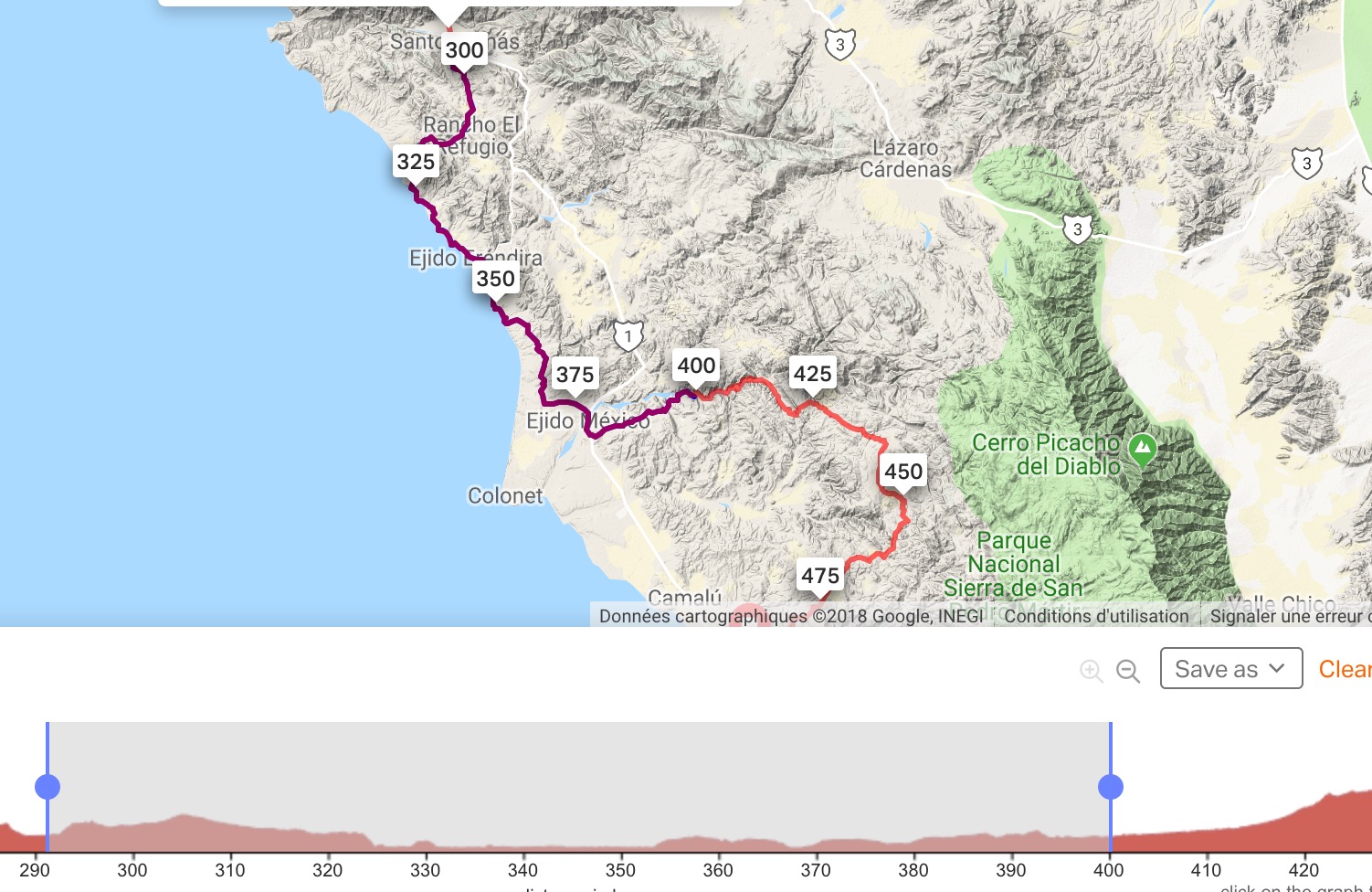 So, assuming he stayed on the track, he should be somewhere between Santo Tomas and Ejido Mexico, maybe a little further.

Maybe he found shelter in a refuge, as there are 3 of them within that range (knowing that he wasn’t seen in El Coyote, as Salvador called them.) 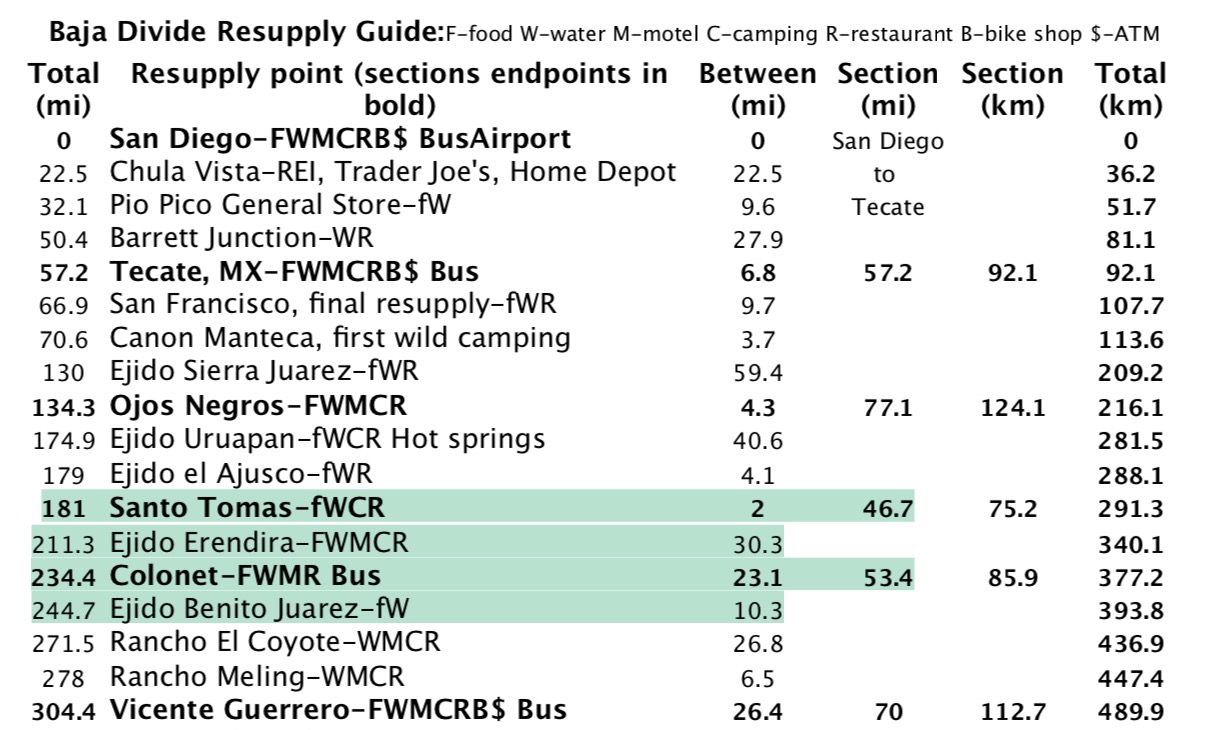 Updates from the community

Thanks to everyone sharing this report, we have some news from the field. Love you guys!

This Red De Apoyo Cycloviajero (Bicycle Tourer Solidarity Network) heard that Andy was seen some days ago without further precision. It means he did cross the border. 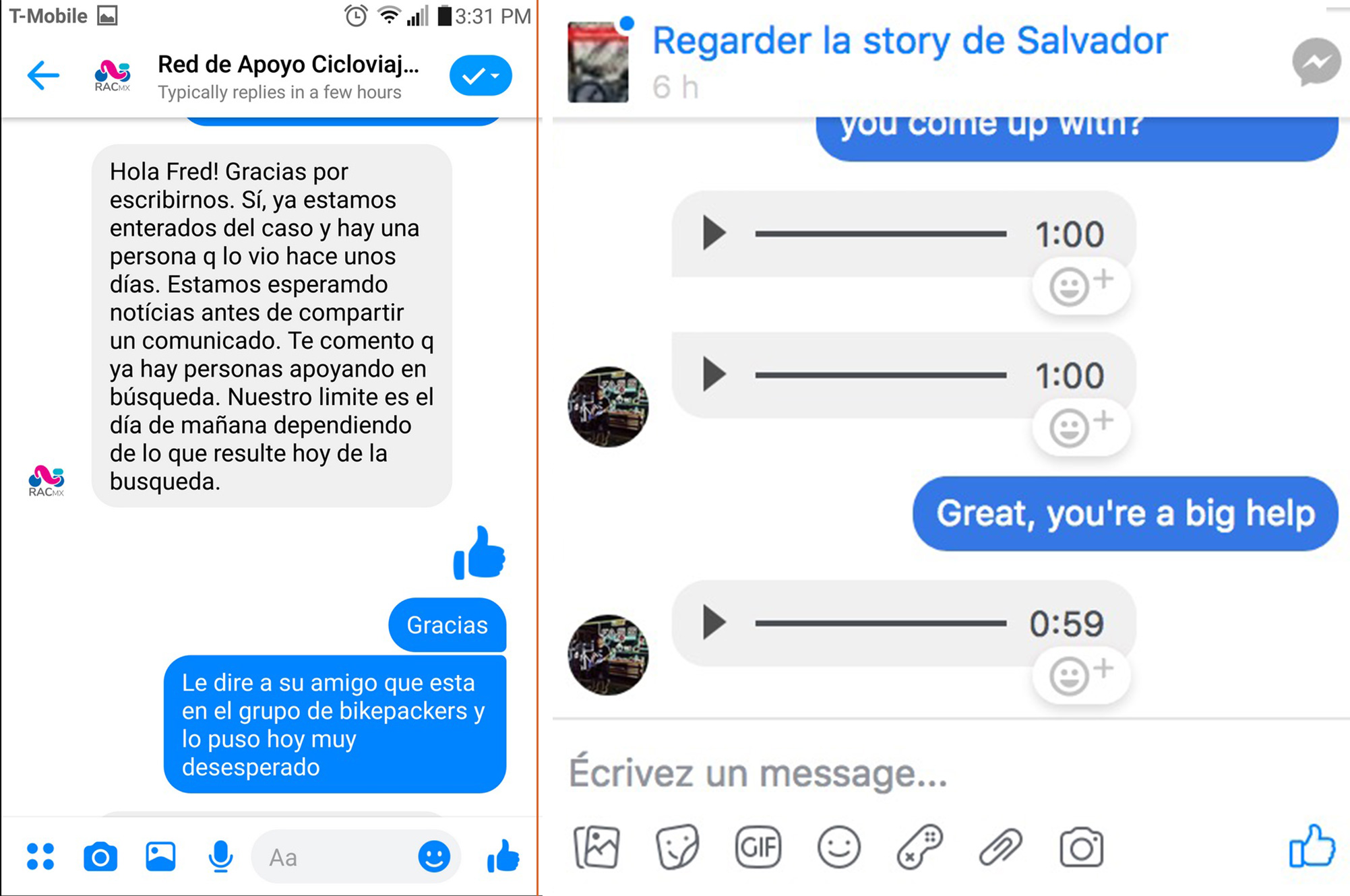 Salvador (who is investigating while working at the shop, hats off!) had a couple from New Zealand at the shop today. They left on monday and have followed fresh tracks of a single bike all week long (except they got washed away by the rain, of course, but found them again today).
They didn’t ride that loop to El Coyote, but straight from Colonet to Vicente Guerrero.

If these are Andy’s tracks, he should be in Vicente Guerrero today or tomorrow. 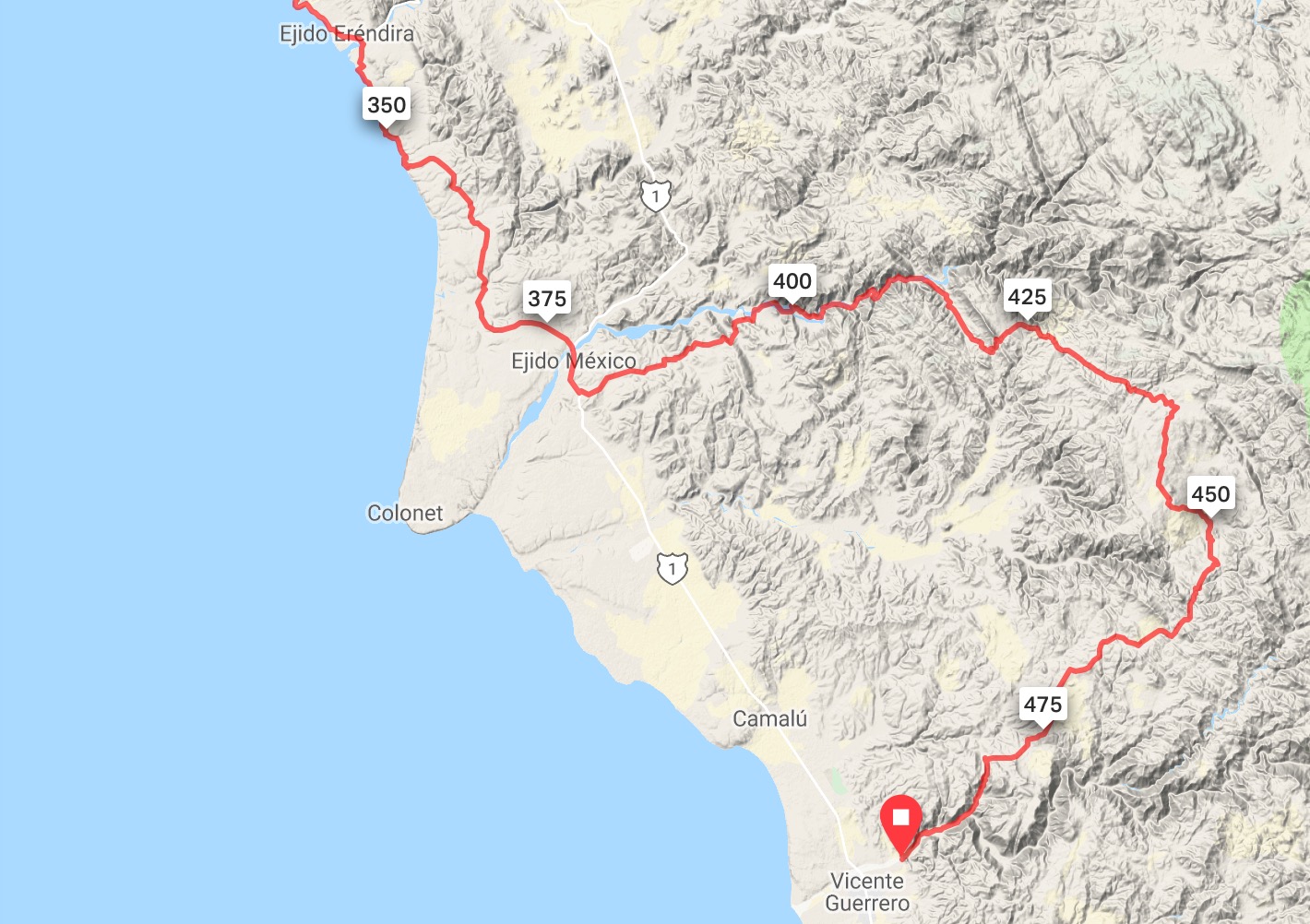 Andy is usually quite active on social media

He posts on a daily basis (and is quite recognizable by his heavily underexposed lansdcape pics) :’D 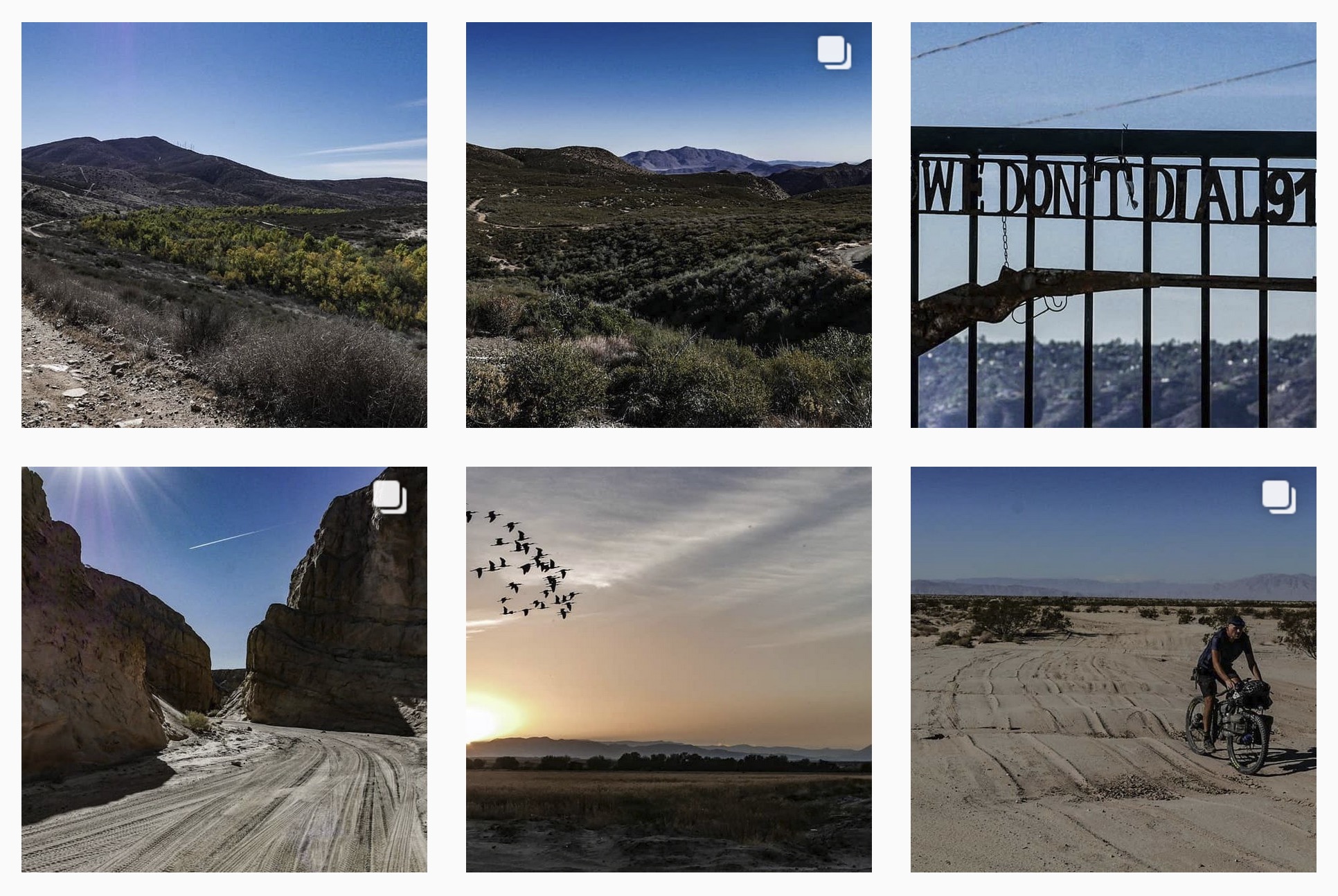 Traffic before the border

While one could expect losing signal in the Northern Sierra, main concern was : “Did Andy make it to the border?”
Border roads can carry lorries and fast traffic… Not ideal for a bike. 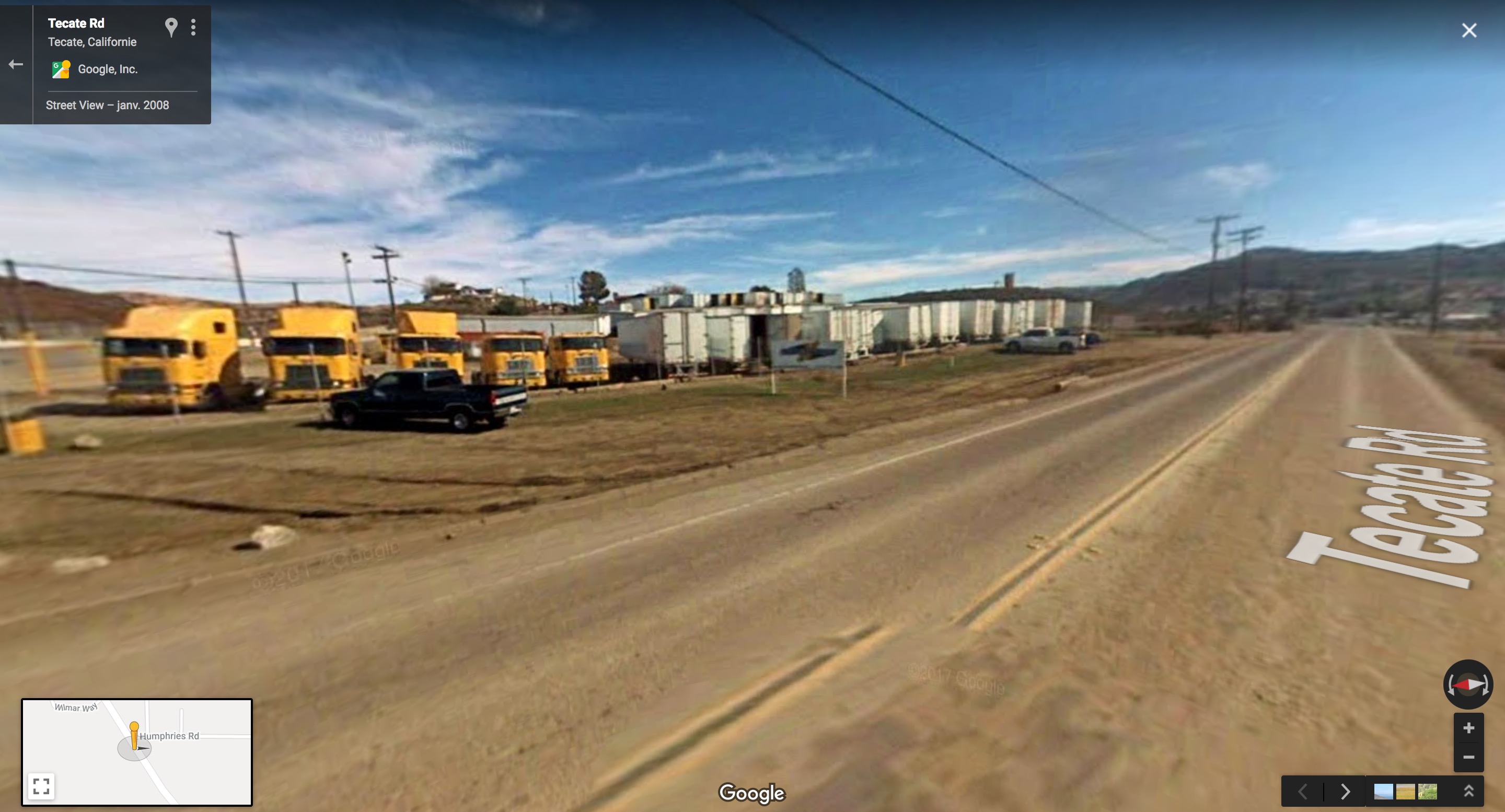 Some neighbourhoods of Tecate have somewhat of a bad reputation. So much that the track of the Baja Divide was edited to avoid them. 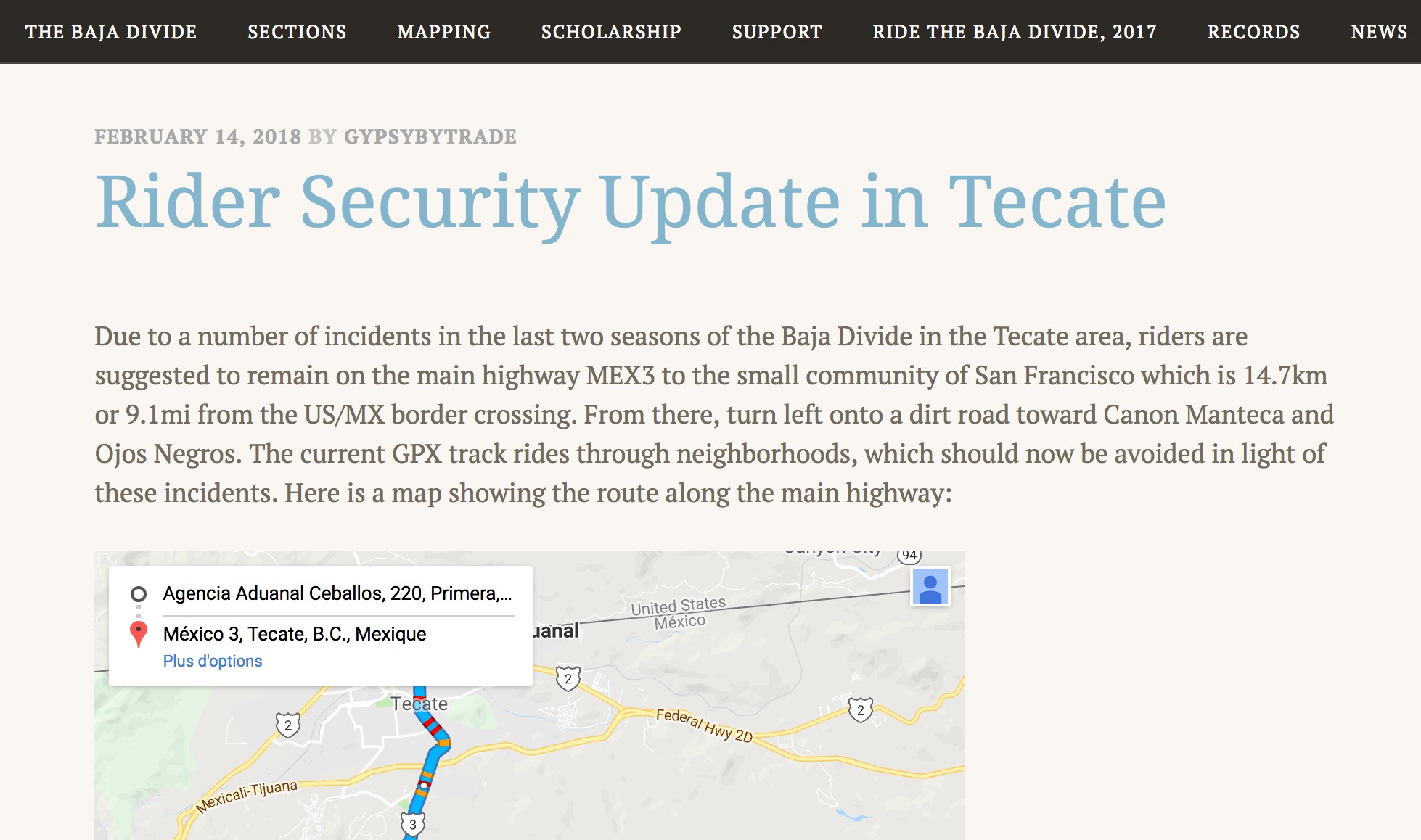 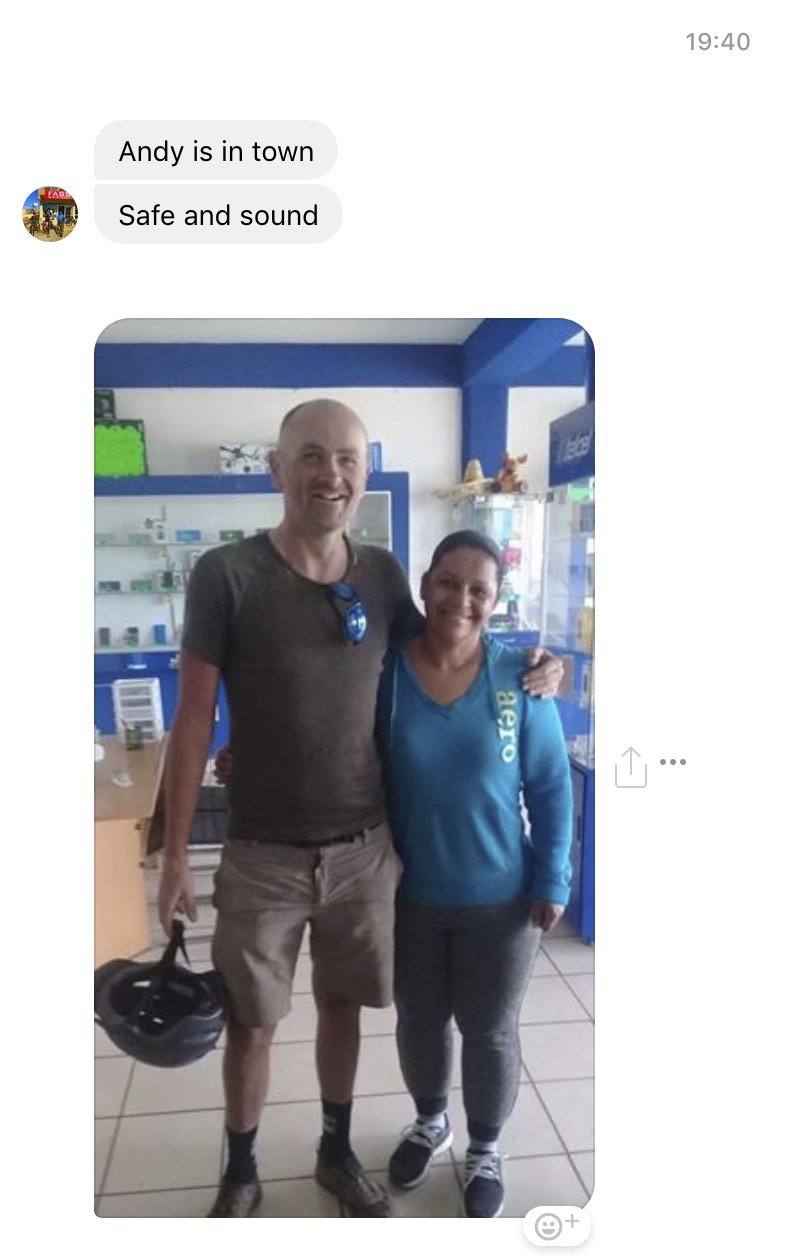 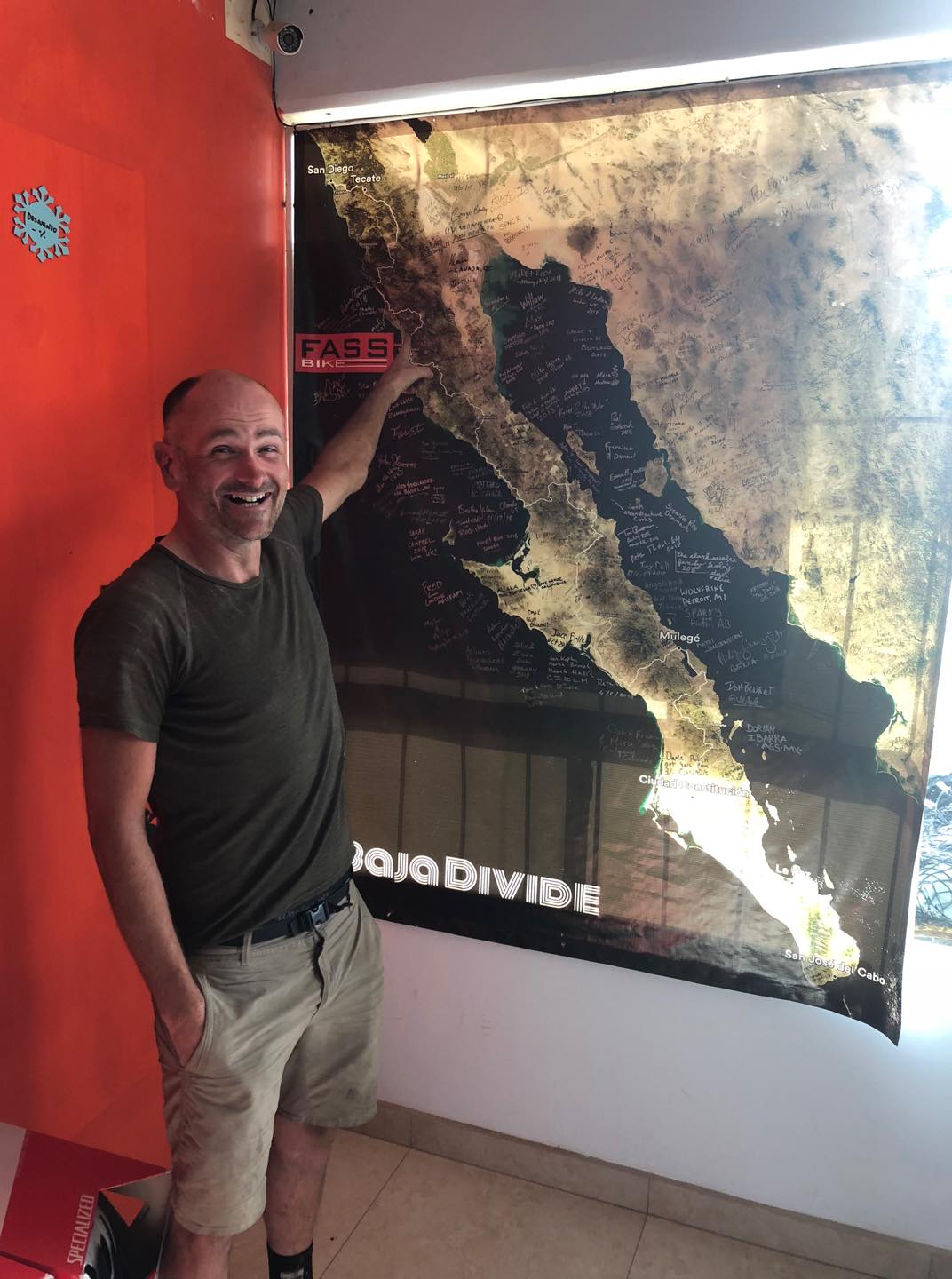 What I learnt here

All’s well that ends well. Still, in the process, I learnt a couple of things:

But I also learnt that: 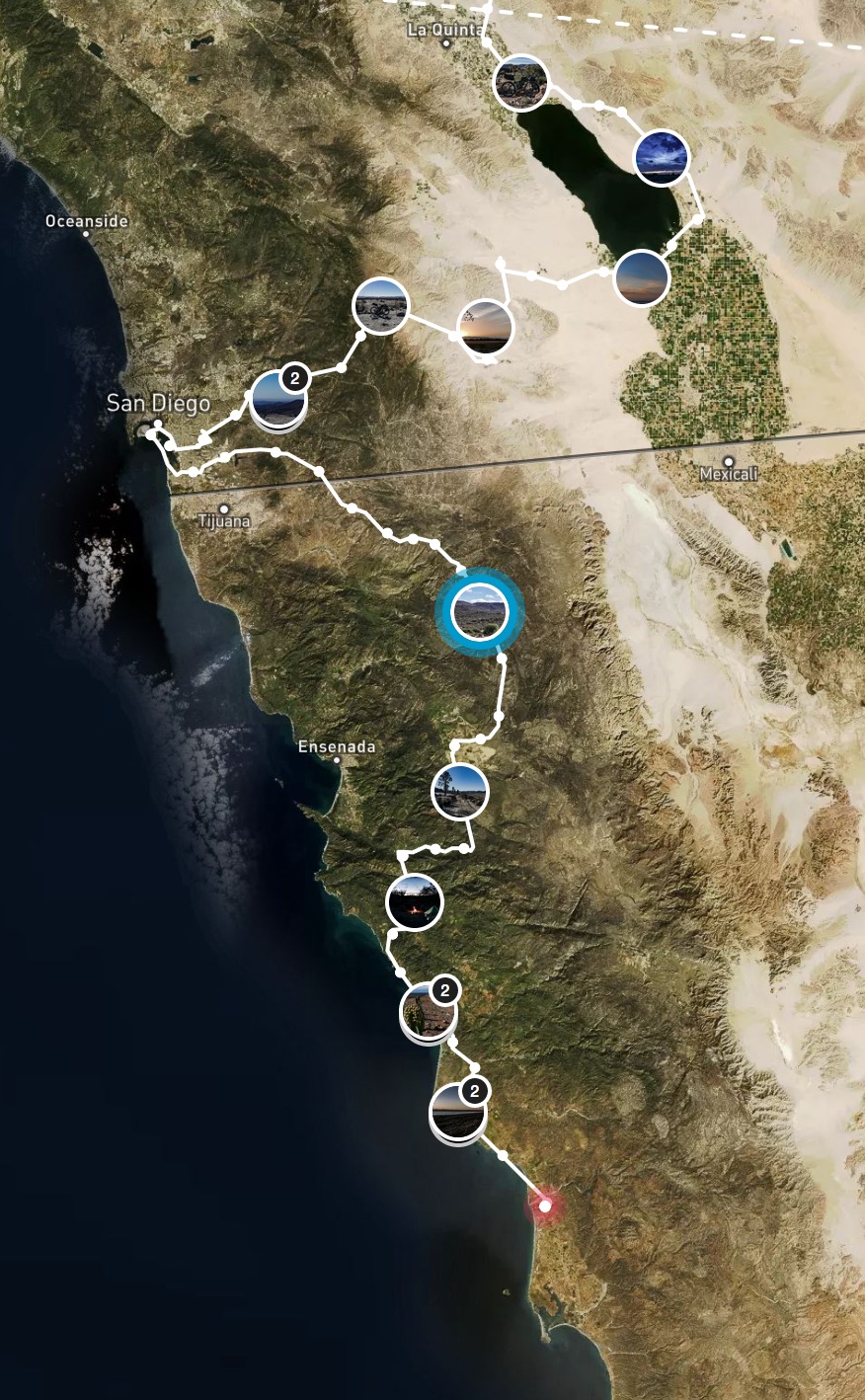 I am sure that’s gonna be a fantastic story on his Polarsteps!

In the meantime, here is a message Andy’ mom sent me, with some explainations:

Andy just phoned from Salvador’s shop and he will be in touch with you.
He is ok but had not been able to get his phone connected and had not got cash from Tecate as he was keen to get through it because of it’s reputation. So he has only had money for basic food this week but is now getting another SIM card and hopes to be able to connect more easily.

He is rather shocked that we have been so worried and was amazed to be recognised by someone in the street! So I think he plans to stay in the town today. He didn’t realise his tracker on polarsteps wasn’t showing up so he will have a lot to upload soon.

Andy’s parents and I are extremely grateful for your help

Seeing a community activate this fast and this efficiently really is heartwarming.
Thanks again everyone for hitting “share” buttons, for taking long shots like “I think I know a guy who knows a guy” for the phone calls, for the kind messages and the good vibes.
I knew I could count on people who know Andy or me… Still, I couldn’t help but be impressed by the number of total strangers who got involved in this quest!

Of course I cannot name everyone who took part in this, but I need to mention the Baja Divide Facebook group, the Red De Apoyo Cicloviajero México, Enrique who went to check himself at the border in Tecate and above all, Salvador (aptly named!) who apparently knows everyone on the Baja Divide!

Salvador made numerous calls, on-field weather reports, tourist-questioning and word-spreading in Vicente Guerrero, all this while working at his shop.

If you ride this area, you definitely have to visit him and say Cyril thanks him!

Here is a link to his shop, that’s the very least I can do to thank him.

He even made sure we won’t lose Andy again, Toy Story style! 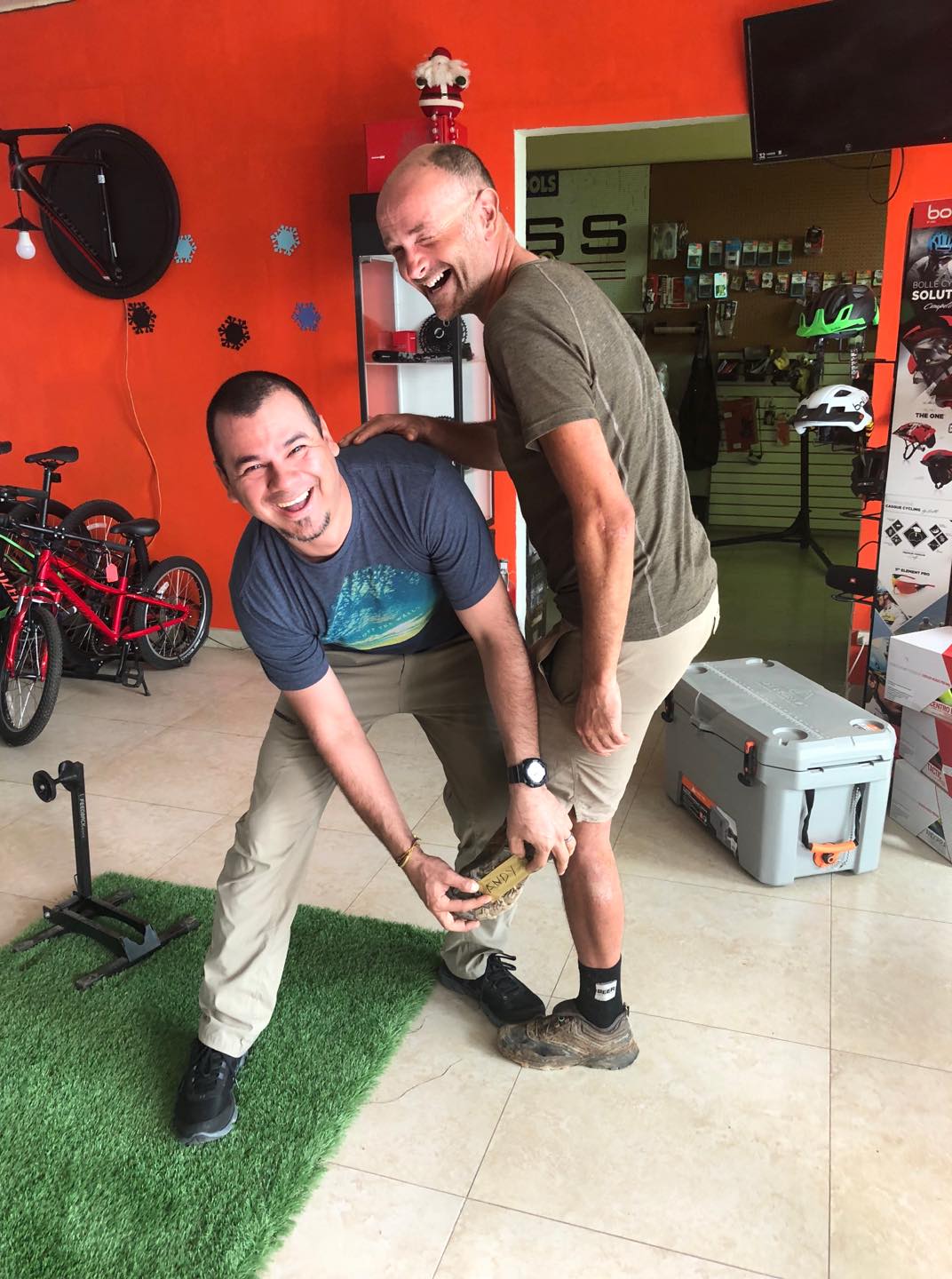 A word from Christine Cox

So grateful to all you fantastic cyclists on the network out there. Such a relief to us, his family, to know he is okay.
Can’t thank Cyril enough for springing into action on Friday and for Salvador of Fass Bikes for spotting him.

Impressive work and we are truly grateful. How important is community networking for us all.

Update from Baja California. I got into town to find out that I'd been reported missing. I'm fine I just couldn't connect to any networks here and didn't have enough cash for a new SIM card until I got to an ATM. Many thanks to my good friend @cyrildiabolo for putting the word out and @fassbike for helping out too. It's great to know there's a community it there that keeps an eye out for their own. _________________________________________ Normal service shall resume. ????? _________________________________________ From a campfire at dawn, along seemingly endless stretches of dirt roads through what I can only describe as wilderness, to a #lapcatsofinstagram outside a store on highway Mex1. #bikepacking #sixmoondesigns #campfire #doubletrackfanatic #bajadivide

So now, back to beautiful bikes, bikepackers’ portraits and some traveller’s philosophy!

Cyril lives by bike. As a dad on his cargobike or seeking adventure on the trails, he enjoys leaving his French Riviera, taking time for shooting photographs or for a fine single-malt under the stars.